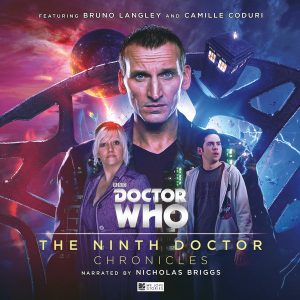 Old Doctors never die, they just…Well, they don’t even fade away, they’re all still out there somewhere, saving the Universe from itself and everyone in it from themselves. That’s the beauty of time travel and it’s rather bizarre nature, none of the Doctors are really gone, they’re still bobbling around in the Tardis doing what they’ve always done. The Ninth Doctor Chronicles is as you’ve probably guessed from the rather suggestive title, all about the first incarnation of the Doctor to emerge from the Time War and his ongoing efforts to not get involved in the affairs of those whose paths he crosses. But as hard as The Doctor tries to avoid trouble, and he really does try  to avoid it, it always seems to find him and in this latest brace of adventures, trouble wraps it’s arms tightly around him and refuses to let go until he steps into the breach and does what needs to be done.

Beginning with The Bleeding Heart in which the Doctor discovers that tragic secret behind, and truth about, the planet of peace, Galen, before moving swiftly on to The Window on the Moor in which a magical city that provides the inspiration for one of literatures most famous stories of lost love and hopeless romance is freed from the grasp of tyranny by Rose and the Doctor, The Ninth Doctor Chronicles hits the ground running and never pauses for breath or slows down from beginning to end. Having triumphed, sort of, and saved established history, the wibbly wobbly time effect kicks in and we’re transported to Birmingham 2012, in the immediate wake of Dalek, in which Adam, Rose and the Doctor battle against yet another embittered victim of the Time War who in The Other Side just wants to do what every creature does. That is, live. But the price demanded for that right is far too high and the transaction is halted in heart-breaking fashion by the crew of the Tardis.  And then it’s time for the final, for now, entry in this series, Retail Therapy in which the unflappable and unstoppable Jackie Tyler in her guise as a purveyor of weird and wonderful creatures helps her daughter and the Doctor to save the “little people” from the machinations of the one percent and their devious plans for the population at large.

While Christopher Ecclestone is still undecided about returning to the role of the Ninth Doctor, he isn’t really missed as Nicholas Briggs does such an astonishing job of capturing the personality and essence of the aforementioned Doctor that when you hear him, the image that immediately forms in your mind’s eye is that of the al too familiar lanky, leather jacket wearing, slightly jug eared, northern Time Lord. It is an extraordinary performance that guarantees the safety and sanctity of the Ninth Doctor’s place in the continuing audio drama mythology of the Whoniverse. Still, it’s mildly annoying to know that people who are that talented exist in the world, but that said without Mr Briggs we wouldn’t have these new tales, so all in all, everything sort of balances out. Sort of. Working to the same formula as the much missed Companion Chronicles, that is part narration and part performance, The Ninth Doctor Chronicles is a delightful set of engaging, exciting stories that feel exactly like the first series of “new” Who did, harnassing all of the wonderful energy and magic of that era, thanks to the magnificent writing and supporting cast. But truth be told, the leading man steals the show from all of them by bringing the Ninth Doctor back into the fold. Which is exactly as it should be. After all, he is the Doctor… Tim Cundle