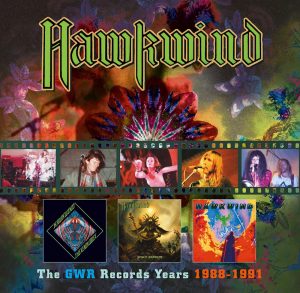 Who doesn’t love Hawkwind? Hippies, punks, metal heads, rockers and psychedelics of every ilk usually have a soft spot for them, somewhere. Nicely packaged in a clam box case the content of The Xenon Codex, Space Bandits and Palace Springs is also accompanied by a double-sided colour poster, making for an enticing treat all-round.

Originally released in 1988 and demonstrating a classic straightforward space-rock approach from the band, The Xenon Codex channels driving groove and plenty of eclectic atmospherics which hone together the whole feel of this group. Paced rockers like The War I Survived give real depth to slower tunes such as Wastelands of Sleep and Tides. The mystique of Sword of the East does nothing but enhance the audio trip even further, proving just why Hawkwind are a household name, even to this day. Disc 2, Space Bandits undertakes a more psychedelic feel, immersing itself in all aspects of trance, and delivering seven tunes of pure mind expansion. Accessible and tuneful, more people will know the tune of Images than will expect to as latent memory is released from the darkest cavities of the mind. The uncanny artwork from the album front and rear sleeves totally sums up the contents, and played from start to finish this is an epilogue of pure prowess. Food for thought, but without over-indulgence. Originally released in 1990 this saw the band enter the decade inspiring countless others whilst doing what they wanted to do. Disc 3, 1991’s Palace Springs was the final album for GWR Records and features some first-rate new tracks Back in the Box and Treadmill complimented by a selection of Hawkwind classics captured in a live surrounding. This confirmed the bands abilities once again; stretching boundaries but without losing any of the archetypal feel. Emerging into the 90’s was not difficult for the ever-evolving group and the backbone of Hawkwind’s resonance can be felt throughout this release. The contents of the twenty five songs contained within offer something different each time they are heard, but then again this band are something the listener should never over contemplate or try to fathom out entirely. Hawkwind have never followed trends, and the mix of sounds across the box set shows fruitful diversity without watering away their initial traits. For diehard fans or newcomers this is worth picking up.   Mark Freebase