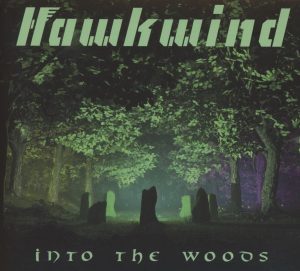 Something of a sequel to last year’s Sci-Fi concept album The Machine Stops, Into The Woods sees Hawkwind return to their more Hippyish roots both musically and lyrically. Kicking off this 13 track album with the title song, it’s Hawkwind at their dependable Warrior At The Edge Of Time/Space Ritual best, with bassist Haz Wheaton propelling the song along in a style reminiscent of Lemmy. The band continue in this vane for the next few songs with Have You Seen Them (another song premiered at the band’s short warm up tour in March) being particularly strong, and in a similar style to the title track; unfortunately things take as bit of a dip after this, as the band invoke a more spiritual ‘return to nature’ vibe. The songs (Ascent, The Wind and Vegan Lunch for example) are decent enough but lack the vim and vigour of the earlier tracks; and whatever your position on the subject of meat eating there’s no denying the lyrics to ‘Vegan Lunch are probably among the worst you will read this year. Into The Woods isn’t a bad album per se, and I’m sure Hawkwind diehards, especially their original fans, will dig it’s Earth Mother influences, but for me it’s a tad disappointing after the much stronger The Machine Stops. Conan Troutman