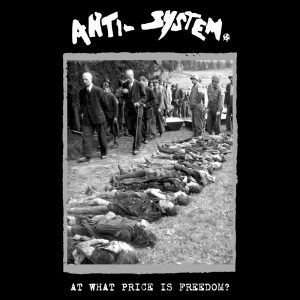 With their first release in 30 years Anti-System bring back the spirit of ’82 to such an extent you almost smell the Evostik as the needle hits the groove.  The five tracks on offer are 3 brand new tracks, including the blistering eight-minute title track along with two re-recordings from their 1985 opus No Laughing Matter.  Overall the record brings to mind the majesty of Discharge’s Why? and is as relevant and raging as anything that came out around the time of their original incarnation.  Tune in, drop out and fuck washing for months.  Nice one. Darrel Sutton