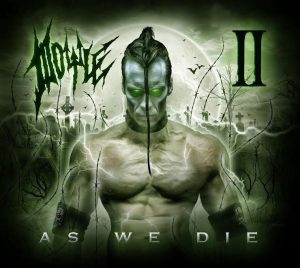 Doyle II: As We Die has seen its release date pushed back multiple times due to issues with the mix but Doyle (the band) has finally released this long-awaited second album. I know that I have personally listened to their debut album Abominator over 150 times as documented by iTunes and have now listened to As We Die somewhere close to a dozen times since I downloaded it two nights ago. I know you’re wondering what I have to say about these thirteen new tracks… I LOVE EM!!! Alex Story and Doyle Wolfgang von Frankenstein are both musical titans and together they create metal that’s so damn good I just can’t get enough. Juicy riffs paired with tasty vocals combine to deliver a musical experience that has to be felt as well as heard. Usually a review mentions the favorite tracks of the reviewer so I’ll say first single Run For Your Life and deeper cut Witchcraft because they have such great choruses but truly every song on this album is fucking great. If you enjoy The Misfits’ 90s revival, Cancerslug and Doyle’s Abominator then you are guaranteed to love Doyle II: As We Die. If you haven’t pre-ordered your copy yet then get your ass on the internet and buy this album before your friends find out you’re a pussy. Jim Dodge