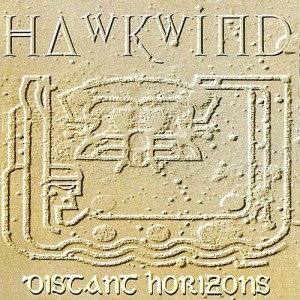 Hawkwind – Distant Horizons CD (Esoteric Recordings/Cherry Red)
Originally released in 1997, a time when ‘trance’ and Glastonbury were booming… this is when Hawkwind embraced the experimentation of mixing new-age sounds along with their usual reverberations. Synthesised space rock ambience at it’s warmest here, without a doubt. Hawkwind hadn’t lost their organic sound or approach though, ‘Phetamine Street’ made sure of that while ‘Waimea Canyon Drive’ and ‘Reptoid Vision’ head on down the cosmic highway, so as not to disappoint the old school. ‘Distant Horizons’ isn’t a vast change in direction; it’s just a deeper, richer sound – as album opener and title song demonstrates and performing as a four-piece for this part of the Hawkwind jigsaw is no abstract issue; the sounds and musicianship seem to easily take chunks from the established spectre that Dave Brock had created. This is a definitive re-mastered edition complete with three previously unreleased bonus tracks and stocky sixteen page accompanying booklet. ‘Distant Horizons’ is another leaf from the psychedelic rainbow of Hawkwind and it will take you deep into space. Mark Freebase