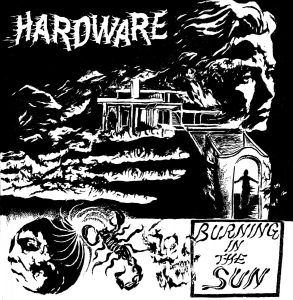 Have you ever wondered what anger would sound like if science ever managed to strip it down it it’s rawest, most basic components and converted the biological chemistry that creates and fuels it into something the human ear could hear and understand? The wonder no more because I have it on good authority from punk scientists holed up in secret clubs the world over that it would sound like Burning in the Sun.  If Spazz were a D-Beat band and went on a meth rampage in a stolen Mac truck, ploughing it through suburbia, shouting obscenities at old people and children, crushing everything in their path while playing their frantic brand of Hardcore , then they would sound exactly like Hardware.  And they’d be all kinds of awesome. Just like Hardware are… Tim Cundle