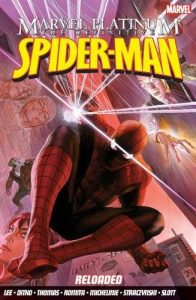 Pete’s had a long, varied (there’s more to being Spider-Man than just fighting the Green Goblin and Doctor Octopus and swinging between New York’s skyscrapers), dangerous, astonishing and exhilarating career and there’s no sign of him slowing down or that it’s going to come to an end anytime soon.  With his fourth cinematic incarnation (and yes I do class Nicholas Hammond as the first man to play him on the big screen as I saw him crawling up walls and beating up bad guys as  Spider-Man in the Woolton Picture House in ’77 /’78) about to make his solo debut and with the world poised to go web-head crazy, it was inevitable that some of the more memorable elements of his aforementioned career would be re-released  to let all of the newbies know just what it was, and is, that they’ve been missing out on.

Surprisingly though, The Definitive Spider-Man Reloaded doesn’t focus on Spidey’s more action oriented escapades, choosing instead to concentrate on some of his more cerebral, thoughtful and character driven adventures and encounters.  More of a window into the hero’s soul, a brief view of his world, what makes him tick and of the relationships and people that are both important to him and have had a helping hand in shaping and fashioning the man that he’s become. That’s not to say that it doesn’t include its fair share of bruising, high flying fights and drama, it does, but The Definitive Spider-Man Reloaded does something far important than just putting a who’s who list of Spidey’s conquered villains on show and letting him flex his heroic muscles. It lets the world into Pete’s greatest secret, the one that every long-time fan of the wall-crawler knows all too well.  That Spider-Man, and his alter ego Peter Parker, is an incredibly complicated, intelligent, fully rounded and more often than not dysfunctional character who is plagued by the same doubts, fears and insecurities that the rest of us are; all of which make him all the more relatable, likeable and human.  And serve to help illustrate just why Peter Parker and Spider-Man are so beloved, and have been for more than five decades, by four colour fandom and the world at large.

Whether it’s his first encounters with the Vulture and the Shocker, his initial meeting, and team-up, with Iron Fist, his very own One Flew Over the Cuckoo’s Nest moment in which he’s incarcerated in a mental hospital and brings the institution crashing down from within or his initial encounter with the extra dimensional entities that feed off the life energy of web-fuelled heroe,s it’s all packed into this weighty tome. Then there’s his meeting with the new vulture during J Jonah’s campaign for mayoral re-election, which ostensibly sets the course of his and his nearest and dearest’s destinies almost up to the present day and then there’s the story that’ll smash your heart into a thousand pieces and make you see Pete and Spidey in whole new light. Just knowing that he carries the memories of his meeting with The Kid Who Collects Spider-Man twenty four hours a day, seven days a week and forever more… Well if you’re anything like me, it’ll make you like Pete even more than you already do. Because you do right? Heck everyone loves Spider-Man. And The Definitive Spider-Man featuring tales from, and by, some of the greatest writers and artists to have ever committed his stories to posterity just proves what you, I and everybody else out there already knows. That Spider-Man is the greatest super-hero to have put a costume on, battled evil in all its forms and saved the world from destruction more than times than the average number of calories in a Big Mac meal.  He was, is and always will be the best of the best… Tim Cundle