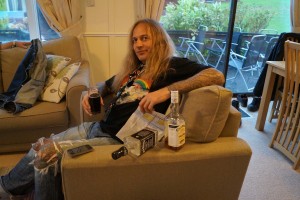 The HRH events are now fast becoming an established get together, so much so that the popularity increases despite who is present on the bill. The dates are firmly booked in the rock and metal communities diaries and this established brand, now with its tenth edition underway next time is a complete hive of rock, booze, and euphoric partying the entire weekend. 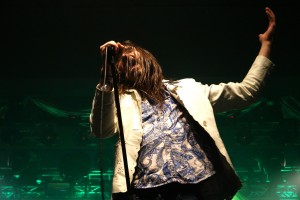 Gracing the main stage CROBOT show exactly why their debut release on Nuclear Blast is turning so many heads. A quality brand of retro induced rock fronted by vocalist Brandon Yeagley who in-turn draws the healthy sized audience from a mid-afternoon slumber – he actually looks like a rock star, and has the vocal pipes to boot. With a crazed bassist also stealing a lot of the live spot light this Pennsylvanian quartet are fondly appreciated by all present, setting a new precedent for the rest of today’s bands to follow, or better. ‘Something Supernatural’ sounds great on CD, but this band can replicate its contents where it matters. DEAD CITY RUINS play to a sizable crowd on the 2nd stage. The Aussie’s bang out a hard no nonsense set of rock ‘n’ roll that slaps people in the face and leaves them crooning for more, obvious similarities come from other ‘down under’ bands, but maybe that’s what makes them so appealing. Great sound also benefits the over-all impression for them. 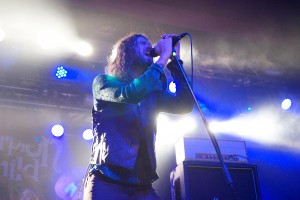 Back in the main arena SCORPION CHILD nonchalantly cruise through an hour-long set of desert rock psychedellia. Slightly less ravenous than label mates Crobot, and giving off a less energised feel, but constantly note perfect performance, it is no surprise a buzz is circulating around these guys. Strong songs and excellent musicianship will secure this bands longevity, although a little more visual on the recital would go a long way – but they have time to hone this. 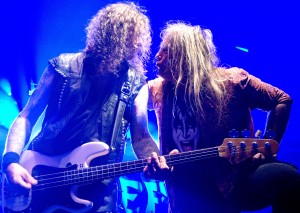 Stars of the day most definitely are HELLOWEEN. Opening with a couple of golden classics ‘Eagle Fly Free’ and ‘Dr. Stein’ really got the tightly packed crowd into the swing of things. This sounded just how it did back in 1988 when I was lucky enough to first catch the band. Concrete tone, and a stunning stage presence just hammered home how good these guys still are. Title track from the new album ‘God Given Right’ sits up there nicely alongside all things metal giving the audience exactly what they wanted, with Andi Deris commanding the forefront as a true vocalist should. The atmospherics were right for Helloween, the performance was perfect and plenty of surrounding people were smug with what they were witnessing. Climaxing with ‘Future World’ and ‘I Want Out’ was a very smart move, and lapped up completely by all present – HELLOWEEN have a foothold and a strong presence here at HRH 9. 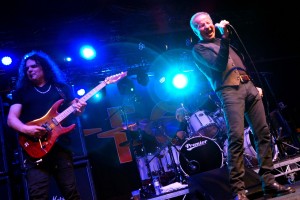 Sadly UFO didn’t quite match the excitement raised by said show. Playing tightly and executing some great new tunes, Phil Mogg and the boys would of benefited further by playing more of a greatest hits show, people didn’t seem to be singing along as much as one may of expected. Don’t get me wrong here, they are a great band musically; very talented in fact still, but the energy levels just could not match. Cutting their set short, so I could catch the amazing BLACK STATE HIGHWAY was always going to be a no-brainer. Pulling in a remarkably large crowd was going to be no mean feat whilst the likes of UFO play the main stage, but this Brighton based bunch completely managed to do it. With such a great vocalist and sound that seems only achievable with years of hard work, the relatively new band seem to revel in the response to their fuelled driving rock. With dynamic hard grooves and memorable melodies BLACK STATE HIGHWAY could of easily created a stunning performance on the main stage. 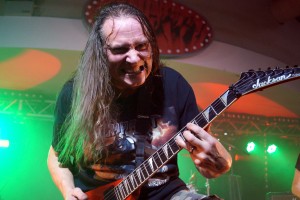 Saturday saw an early start with London metallers CHARIOT gracing the 2nd stage. Back in the 80’s these guys started to make a name for themselves, and ‘Burning Ambition’ was a much talked about release. Fans of NWOBHM and trad-metal lapped up a powerful forty-minute set, as the quartet gave it their all – frontman and guitarist Pete Franklin easily a contestant for personality of the weekend. My only complaint the failed inclusion of ‘Life On The Line’ – why boys, why? A bit of (sl)easy rocking from CITY OF THIEVES came a welcomed mid-afternoon call for those present, but it was probably GUN who pulled the biggest crowd of the whole event  and ‘Word Up’ created a memorable moment for so many present. The Scottish band certainly were putting on a show for a lot of fans. 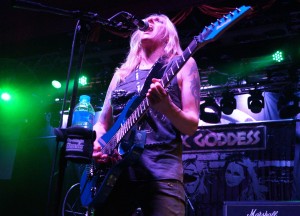 ROCK GODDESS seemed to create a huge amount of interest, and the recently reformed ladies looked and sounded great. The London trio bashed out an hour-long performance playing so many old school classics, the older proportion of rockers present really embraced what had been missing for so long. With a great sound, and a brash sense of humour the ladies were taking no prisoners and made it quite clear from the start that they were doing this primarily for their own purpose. FASTER PUSSYCAT have the songs. Fact. However tonight a somewhat lethargic performance didn’t quite fire up what quite a few people were expecting. Thankfully steering away from the industrial tracings the band dipped their toes in several years back, but severely lacking visual stimulation compared to what they were capable of back-in-the-day. Was this part of the new stage presence or simply a band going through the motions? On shutting your eyes it was a faultless soundtrack to debauchery, but visually… come on guys. 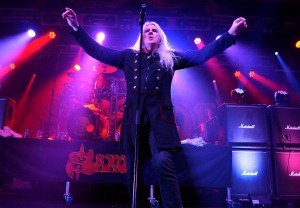 SAXON stole the show today easily. Biff and crew strut the boards with such prowess and passion mixing songs old and new and thankfully mixing up a great selection from their back catalogue alongside newer tunes. This band still has it, and can write some belters of tunes, their relevance is as strong as ever and they all still look great. Icons of metal who have seen it all rise, and then fall, but working hard have seen the rise of credibility and likeability increase sizably for them once again, along with fans openly embracing new album releases. A fitting close to HRH 9 and a strong performance – bringing ‘Crusader’ back into the set after all these years was definitely a correct decision, and giving the fans exactly what they want will only see SAXON’s popularity continue to rise. The eagle has most definitely landed! Roll on next year HRH vets! 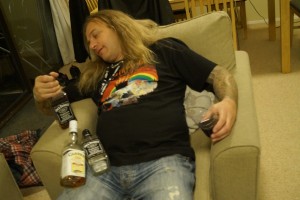