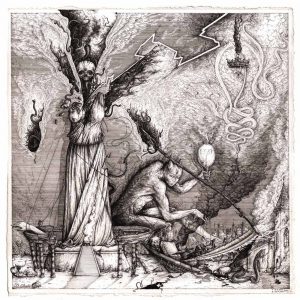 Gutter Instinct have taken that signature Entombed buzz saw guitar sound and add a dose of Mayhem style riffing to create a brutal album that will make the death metal world sit up and take notice. These influences are none more apparent than on tracks such as “Counter Culture”. A brutal lesson in death metal riffing, ending with a pulverizing slower riff and sizzling guitar solo combo. Their black metal stylings are showcased perfectly on the album title track, but what I like about this band is that they know exactly when to break it down and bludgeon us with some slower, doomier riffs. There’s nothing new to report in the lyrical side of things. Cynical views on religion, politics and alienation are all examined here, which is par for the course in death metal-but that’s how we like it. The whole package is brought together by the unnerving artwork of renowned artist Dávid Glomba, also known as Teitan Arts. A Slovakian mastermind who has previously worked with bands such as Cult Of Fire, Svartidauði and Inferno. The band commissioned several pieces of artwork, which adorn the sleeve/booklet of the album and they really do capture the dark tone of the album

A mere 4 years into their career, Gutter Instinct have already received wide underground acclaim for their demo releases and they have toured Scandinavia  with the likes of  Sadism, Chronus and Oberion but it’s “Age of Fanatics” that is going to take them to the next level…… Chris Andrews