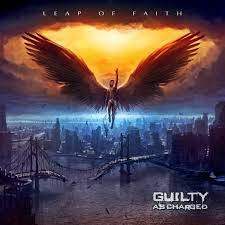 Guilty As Charged – Leap Of Faith (Own release)
Yeah, why not, just kick in the door unexpectedly and without invitation and throw about eight heavy, slightly thrashy metal songs. What a surprise ‘Leap Of Faith’ is! Anything that Belgian band Guilty as Charged does or play breathes heavy metal. Metallica, Testament, Annihilator, Trivium, Pantera… the list is never­-ending. Ever more praise has to be given to the songwriting in general as this four piece has an amazing sense of how to write a more than decent metal song, where catchy and heavy work together perfectly. A great production opens up every song, which then just flows as easy as molten lead. The greatest new metal bands seem to work best without a proper label backing them, the will to work is more visible with this amazing CD as a result. Martijn Welzen