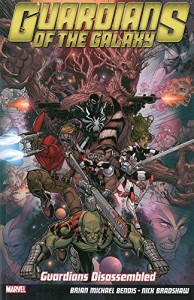 Guardians of the Galaxy: Guardians Disassembled – Brian Michael Bendis, Nick Bradshaw, Andy Lanning and Dan Abnett (Marvel / Panini)
Confucius once said ‘Before you embark on a journey of revenge, dig two graves’ and if Jason of Spartax had studied ancient Chinese philosophy, then he probably wouldn’t have pursued the course of action that he does in ‘Guardians Disassembled’, and he wouldn’t… But wait, I’m getting ahead of myself again, aren’t I? Let’s just say that vengeance while being a powerful motivational tool, it often leads those seeking its comforting bosom down a road they wish they’d never travelled upon, but as the core plot device of a story, it’s pretty hard to beat. This is just one of the many reasons why Brian Michael Bendis’ latest tome is an eye popping, brain melting thrill ride to the furthest corners of the galaxy.

Beginning with Agent Venom joining the Guardians as the Avenger’s official ambassador / representative (hey, call it what you will, the dude is now a member of Quill’s team), ‘Guardians Disassembled’ then engages full throttle as Jason’s plan is out into action, the Guardians are attacked and captured and each member of the team is sent to be tortured, humiliated and dispatched by the ruling bodies of the Empires that they’ve “upset” (that’s putting it mildly) or whose plans they’ve “interfered” (again, a contender for understatement of the year) with. With the Guardians now in their power, the Kree, The Badoon, The Shi’ar and their cohorts begin to enact their revenge, but the harder they push their prisoners, the closer they get to the Guardians turning the tables and escaping their clutches. An escape that begins with Quill managing to finally get the better of his father with a little help from an unexpected, and most welcome, source. And as the Guardians return to what they do best, ‘Disassembled’ beckons the reader a little closer, sharing Agent Venom and Groot’s origin tales with its readers, before turning its focus on Captain Marvel and giving the original Guardians of the Galaxy (yeah there was a team before this team) a twenty first century makeover courtesy of Mr. Dan Abnett.

‘Guardians Disassembled’ is an adventure into the unknown in the company of some of the most compelling and interesting characters, who thanks to Bendis are becoming more intriguing with each and every issue, currently residing in the Marvel Universe. It’s smart, frantic and thoroughly absorbing, and once it gets its hooks into you, there’s nothing much you can do except shrug, give in and enjoy every darn second of the tale as its continuing drama and intrigue unfolds on a galactic level. To infinity and beyond! Tim Mass Movement