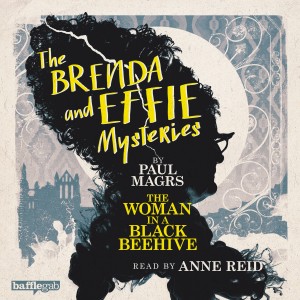 The Brenda and Effie Mysteries: The Woman in a Black Beehive – Performed by Anne Reid, Alex Lowe & Chris Pavlo & Written by Paul Magrs – Download (Bafflegab)
Having sailed past the boundary to middle-age and having witnessed the cyclical nature and popularity of music, culture, genre film and literature time and again, there are few things left that make me whoop, holler and do the dad-dance with excitement, expectation and joy. However, when Bafflegab announced their intention to dramatise Paul Magr’s ‘Brenda and Effie’ novels, books that I just happen to be a long-time fan of, I don’t mind admitting that not only did I do “The Robot”, but I also attempted to “moon walk” around the kitchen, a move that I now realise looked more akin to someone suffering a cerebral event than any form of celebratory strutting. I’d be fibbing, and under-selling said fib to you, if I was to say that I was a little pleased and was slightly looking forward to the series’ eventual release. And now it’s finally here. The first instalment, ‘The Woman in a Black Beehive’, the story of how Brenda met Effie and their weird and wonderful friendship and adventures began.

Set in Whitby, where Brenda (who harbours more than a few secrets, scars and a magnificent black beehive with a distinctive white stripe) moves in order to run a bed and breakfast and live a quiet, unassuming life by the sea. However, anyone who’s ever been to Whitby knows that it has air of subdued, and unassuming mystery, and before she can welcome the first guests to her new establishment, she runs into Effie, a local witch and owner of an antiques emporium, and any ideas that she may have entertained about solitude and peace slowly start to disappear. Brenda soon finds herself investigating spectral cats, supernatural artwork and her new friend’s family history; and just when she thinks things can’t get any more peculiar, her new friend disappears and it’s up to Brenda and a newly made feline acquaintance to bring Effie home.

Read by the always excellent Anne Reid, who brings both Brenda and Effie to magnificent and incredible life, ‘The Woman in a Black Beehive’ is a gentle, intriguing and absorbing drama that lives up to all of my wild anticipation and more. Buoyed by the marvellous Alex Lowe and the remarkable Mr. Chris Pavlo, Anne Reid channels the central characters perfectly in this story that combines supernatural drama and slow burn mystery that unfolds and plays out in a very Northern and very English way, ‘The Woman in a Black Beehive’ is a fantastic, and deftly written and performed opening chapter to what promises to be a truly splendid series. Absolutely, and thoroughly, recommended… Tim Mass Movement