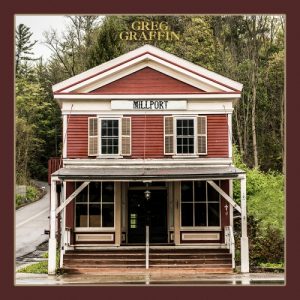 While I can’t claim to have been there since the beginning, for nigh on the last three decades I’ve been, and am still, convinced that Bad Religion are the greatest punk rock band to have ever walked the Earth.  And while he is almost certainly best known for being the frontman of the aforementioned band, Greg Graffin has never been content to sit back and rest on his punk rock laurels.  Being an intellectual and creative polymath, he’s always sought additional avenues to explore, whether through his pursuit of scientific enquiry via palaeontology, the exploration of literary endeavour as an accomplished author, or his enduring love of music as a solo artist. Millport, his third album, finds him continuing the journey he began on Cold as the Clay, delving further into traditional Americana and Country territory and it is, without a shadow of a doubt, his most accomplished solitary work to date. Achingly beautiful, full of heartfelt, emotive, and instantly memorable songs, Millport is an intimate, uplifting record that almost feels like you’re sitting in the same room as Graffin, while he his backing band play these songs just for you; for an audience of one, reaching out and encouraging you to sing-a-long with him. While it might seem, at first, a radical departure from the more visceral musical form that he’s become something of an elder statesman for, Millport is filled with the same sort of spirit and energy as Bad Religion, it’s just channelled differently. And different, despite what the majority of the world currently thinks, is good. In fact, it’s fantastic and if you don’t believe me, then believe in Greg Graffin. And believe in Millport… Tim Cundle