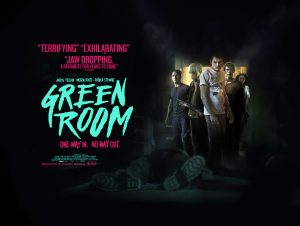 A young punk band struggling to make even petrol money to take them from gig to gig find themselves needing to squeeze in an extra date, with what they know will be a less than receptive crowd in the backwaters of Oregon.  The well intentioned promoter, having let the band down on their promised gig, rather ominously instructs them to stay close to his cousin who will meet them there, and keep to a more aggressive repertoire; if they do they’ll get paid more than enough to make it worthwhile.

This isn’t just any roadhouse though. It’s the venue for regular gatherings and indoctrination for an ultra-aggressive white power movement run with menacing authority by Darcy (Patrick Stewart). Unsettled by the Nazi and white power imagery in the venue, but as yet unaware of the true nature of the club, the band arrive, play and very nearly make a clean getaway.  But here, as so often in life, the insatiable charging appetite of an iPhone ends any hope of an entirely happy ending. Naturally enough the band head back to the green room to pick up the phone they’d left charging there, and stumble upon their fate.  What they’ve seen in that room then becomes the reason that they can’t be allowed to leave with their lives.

At this point, what could have become a mindless, standard siege drama filled with machismo, overblown death scenes and ridiculous dialogue, instead chooses to keep its integrity to deliver a tense, genuinely involving thriller that manages to maintain a sense of humour to the end. Anton Yelchin and Imogen Poots deliver sensitive and subtle performances that draw you in on a genuinely emotional level, whilst Patrick Stewart is utterly outstanding – but then you wouldn’t expect anything else from him. In fact, aided by Saulnier’s witty, thoughtful and provocative script, the ensemble cast ensure every character is fully realised and human, avoiding the obvious cardboard cut-out neo-Nazis you might have expected.

For me though, what really elevates this film is the score.  The Blair brothers’ use analogue reproductions and modulated feedback to generate an atmospheric, sparse soundtrack that is hugely reminiscent of the work of Maurice Jarre, or (if you’re old enough) what Tangerine Dream did to such great effect in Katherine Bigelow’s Near Dark. In juxtaposition to the hard punk played by the bands (and for a chunk of the film pulsing through the green room’s walls as a bass rich thud from the main stage in the next room), it’s hugely effective.  Cutting through the multi-layered soundscape of dialogue, bands playing in the venue, guns, dogs, cars and more, the score builds tension where it’s needed and slips away when it’s not. Truly magnificent.

In the round, Green Room is an intelligent, bloody, witty and accomplished film that is, on every level, highly enjoyable. Thoroughly recommended. Emma Cundle

Green Room will be released in UK and Irish cinema’s on May 13th.