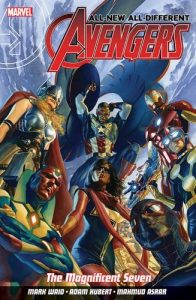 With all the changes, the toing and froing and near constant upheaval that’s been happening in the Marvel Universe in the last twelve months, it’d be pretty easy to lose track of the who, what, when, where, why and how they keep its caped, costumed super-motor purring and in immaculate working order.  Made worse by the fact that it’s one constant, the anchor at the centre of its nucleus, The Avengers were no more, the metamorphosis it was undergoing suddenly seemed much more daunting.  Fractured by circumstance and shattered by its members, the central beacon and guiding light that lay at the heart of everything that the universe was, had disappeared.  Okay, yes, there’s Steve Roger’s Unity Squad and there’s Sunspot’s Avenger’s Idea Mechanics, but there wasn’t a tried, tested and true good old fashioned, team to carry on the long-established and proud Avengers legacy. Until now.  Everything might be different, but the more things change, the more they stay the same and in The Magnificent Seven, Mark Waid, Adam Kubert and Mahmud Asrar reinvent the wheel and guide the much missed and sorely needed Avengers home. They might be all-new and all-different, but they’re still The Avengers.

The Magnificent Seven explodes out of the starting gates at Mach 10 with Iron Man and Captain America (you know, Sam Wilson) realising the same thing that every fan-boy and geek-girl knows and has known, that the world needs The Avengers. And fueled by non-stop action, it continues to accelerate in thrilling fashion from that point onward. Waid and his mind-blowing duo of artistic talent craft a story that sees The Avengers battling alien menaces, chronal villains, a mysterious new faction of surprisingly powerful super-villains and doing what The Avengers do best, saving the world. Throwing together the new, Spider-man (Miles Morales), Ms Marvel and Nova with an old (though very different) trio of core members, the aforementioned Captain America, the Vision, Thor and team founder Iron Man, this latest incarnation of the team has an immediate familiarity that sets you at ease, but is strange, intriguing and new enough to ensure that your curiosity is peaked from the get go. The interaction between the characters, new and old, and their often widely opposing ideas concerning their roles and how, when and under what circumstances they should utilise their widely differing powers creates a wonderful spectrum within the book, which illustrates and enforces the core idea behind The Avengers. That is, that while the book is first and foremost about the team, it’s also about the individuals who are part of it and the struggles and challenges they face in order to fulfil the obligations that come with being a part of the squad. It’s filled with rich, remarkable dialogue and touching, endearing sub-plots like the burgeoning relationship between Nova and Ms Marvel, and Vision’s attempt to abandon his quest to become more human which ultimately ends in his unconscious betrayal of all that he believes in. In The Magnificent Seven, Mark Waid has captured the essence of everything that an Avengers story should be and along with Kubert and Asrar, has harnessed that electrically charged spirit and infused every page and panel of this book with it.  Bursting with raw, fantastic energy, ideas and creativity, All-New, All-Different Avengers feels like it’s the start of something wonderful, and if this first volume is any indication of what’s to come, then like Bendis before him, Waid is destined to become one of the definitive authors of the Avengers destiny.  It’s the stuff that dreams are made of…  Tim Cundle