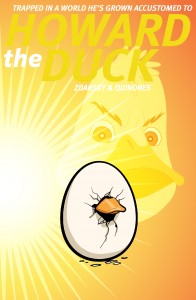 From the mad geniuses who brought you the Ant-Man #1 Shrinking Variant comes the one of a kind HOWARD THE DUCK #1 EVOLUTION OF HOWARD VARIANT! Howard the Duck writer Chip Zdarsky lends his inimitable style to this completely unique cover, showcasing Howard in different stages of life!

Be there for the birth of that fabulous fowl. Marvel at his rebellious teenage phase. Witness his sad and valiant end. Completely unique and individually numbered, each cover features one of seven different evolutionary stages, each rendered at a different and unique size – large, small and everything in between! Fans lucky enough to get their hands on this highly collectible variant cover will own a unique piece of Howard history as no two variants are alike!

“The Ant-Man #1 Shrinking Variant was such a successful experiment, we knew we wanted to try it again right away,” says Marvel SVP Sales & Marketing David Gabriel. “Each one of these variants is numbered and completely unique, showcasing a different Howard at a different size. Waugh!”

The Marvel Universe’s most satirical sort returns to work this March in HOWARD THE DUCK #1, the new, in-continuity ongoing series from Chip Zdarsky and artist Joe Quinones! Be there when Howard ventures through the Marvel Universe, trapped in a world he’s grown accustomed to as he takes on She-Hulk, the Black Cat, and mysterious forces from outer space! Maybe even a Guardian of the Galaxy or two.

Be there for Howard’s triumphant return and don’t miss your chance to own this truly unique, one-of-a-kind variant before they’re gone for good! Run, walk, swim or flap your way to your comic shop this March for the HOWARD THE DUCK #1 EVOLUTION OF HOWARD VARIANT!