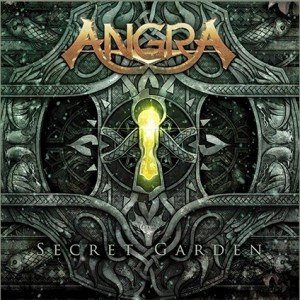 Angra – Secret Garden CD (earMUSIC/Edel)
So four years of silence is now broken! The world-renowned power metal masters Angra have unleashed a new metal beast for 2015. Leading the opus with a grand intro it’s no surprise we are consumed with well held vocals, an up-tempo feel, and a really positive vibe; not to mention chunky rhythms, sharp lead breaks, and a great production and mix that compliments the percussion. Thankfully Angra lean towards metal and not synth pop power! Like most of Angra’s previous releases, a concept runs throughout ‘Secret Garden’ and a strong storyline of imagination; creating an almost prog feel along the way, and delivering a detailed structure of parts. Simone Simons (Epica) lays down some fantastically emotional, melodic vocals during the albums title track, whilst German metal Queen Doro Pesch duets strongly with a well honed presence during ‘Crushing Room’ – extra depth to Angra’s already massive sound. Elements of Helloween’s speed and melody can be heard across ‘Secret Garden’ along with poignant Queensryche feel on ‘Storm Of Emotions’. The techno dabbling during ‘Final Light’ certifies the different elements of sounds proving this is not a stagnant album; ensured with the inclusion of ‘Synchronicity II’ a cover version of The Police classic. Not being done on half values, the album artwork intertwines the complexity and beauty of the harmonies and concepts… almost fairytale like. Who would have thought this band Brazilian? Mark Freebase