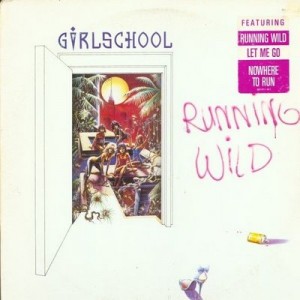 Girlschool – Running Wild CD (Cherry Red)
Unbelievably this is the first time Girlschool’s fifth studio album from 1985 has been officially released in the UK and the first time it has been put out on CD! The sound on here is quite far removed from their NWOBHM early days, with keyboards and vocal harmonies leading a very radio-friendly sound which was aimed at the US market. At the time this release may well have been slated by the press but now 30 years on, it actually makes for decent listening. The sound is very melodic and tuneful – don’t expect the likes of Lemmy to make guest appearances on here – but it does have power and above all big tunes. With the right kind of push this could have easily made the big time, as the style is not far off from what bands such as Def Leppard, Motley Crue or Lita Ford were doing at the time. Original lead vocalist Kelly Johnson had left the band by this point, with vocal duties being shared between Kim McAulliffe and new keyboard player Jackie Bodimead, and I have to say they do a great job. Despite the fact that this was touted as being a change in style, it is still a rocking sound, without being watered down with any ballads. I would suggest that this is a record which has matured with age and hopefully will find a favourable reception and a captive audience that was unable to hear these tunes the first time round. Tom Chapman