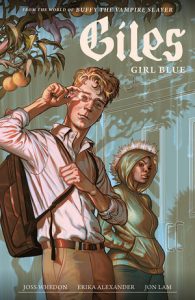 Spun as a mini-series under the umbrella of the Buffy Season 11 comic series, Girl Blue sees Giles off on his own, away from the safety net of the Scooby Gang, not only reincarnated into his teenage body, but heading back to high school to thwart an apocalyptic demon plot.

After gaining his human certificate in A House Divided, Giles makes off to somewhere more suited to a 50 year old watcher trapped in a high schooler’s visage. Living Legend Chartered Academy is suffering from some suitably spooky goings on, and between be-hoodied vampires luring people to a basement full of hungry mystical being, teachers abandoning their posts, and everyone suddenly being too dumb to see any of this as odd – Giles (with phoned-in help from Willow) has plenty to be getting on with, not least of all evil to battle, in the form of the demon Seed.

Unfortunately, a lot of the cool magic stuff and witty introspection we’ve come to expect from these series’ gets lost and confused in the attempt at overpowering everything with the scattered love story between Giles and the resident vamp, Roux. It’s a love-hate-do-they-don’t-they-should they that kind of gets dragged backwards and forwards so much, that by the end you don’t really care and just want to cut straight to the impending Armageddon. Buffy and Angel is one thing, but having Giles fall for Roux seems a little lazy, and it’s a shame. Ultimately, the four part box this story is crammed into makes everything feel too rushed for a plot line of that complexity. How do you explain run of the mill teenage dating in four comics, nevermind resurrected watcher/undead slave girl feels?

Don’t get me wrong, the writing is still great. There are some laughs to be had, and we even get treated to the suggestion of an accompanying playlist for the reader’s added enjoyment – a cool personal touch that adds a layer of depth to the cutaways and the endless moody monologues from Roux and Giles. Roux’s story of becoming is rich and new, with art to do it justice. But squashed in is how it feels.

A probable must-have for the superfan and avid follower, but maybe not the best of the spin-offs. I know it’s high school, but in this particular instance maybe a few more monsters and a few less hormones, please. Sophie Francois