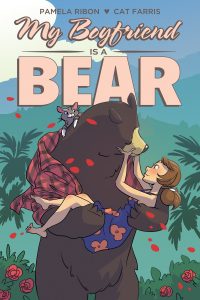 My Boyfriend is a Bear is an absurdist, modern romance story that follows Nora, who—after a succession of terrible boyfriends finds—true love with the most unexpected of suitors: a 500-pound American Black Bear. They’ll soon discover that hipster neighbors, judgmental friends, and Bear’s impending need for hibernation will put their relationship to the ultimate test.

Writer Pamela Ribon (Ralph Breaks The Internet, Moana) said, “I’m thrilled to have the opportunity to bring Nora and Bear’s story to the live-action world. It’s a unique challenge, and we are so excited to see where we can take their unforgettable romance.”

Portland artist Cat Farris (Plants vs Zombies, The Last Diplomat) said, “Pamela and I poured our hearts into My Boyfriend is a Bear, and we’re beyond excited to be able to bring this tale of love in unexpected places to an even wider audience.”

“We are so proud of Pam and Cat’s adorable, hilarious, and heartfelt graphic novel, and working with them to bring this romance to the big screen is an incredible privilege,” said Charlie Chu, VP of Creative at Oni Entertainment.

Oni Entertainment is the film/TV division of Oni Press representing its diverse line of original comics and graphic novels in collaboration with, and for, its creators.