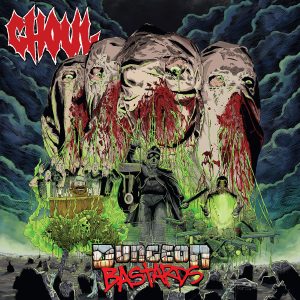 A long time ago, in a land far, far away, a die-hard metal head, frustrated by the preponderance of weak, syrupy ballads, hair spray and tasselled leather jackets that were engulfing the airwaves and MTV, made a transatlantic phone call and put his plan to save his beloved scene into action.

“Ja, this is Tom Angelripper”

“Not good Tom, not good at all. Listen, I know that, just like me, you’ve seen the way the wind is blowing and I think it’s time that we initiated the Ghoul Protocol….”

“Do you have the consent of the Voodoo Council and the Necromancers Guild?”

“I do, and I have the best Bay Area Thrash Maniacs and Crossover Lunatics ready and willing to share their brainwaves with the Teach-A-Tron 2000 and a tutor from far beyond the stars called Oderus Urungus waiting to guide the project to fruition…”

“Good. Then let us begin”

Thus, in the dark, secret fortresses and hidden castles of Creepsylvania, the great work began. And with the aid of dark sorceries, forbidden arcane and mystical technologies and the guiding hand of an Intergalactic Scumdog, all labouring in convert and conspiratorial conjunction, Ghoul was born. Steeped as they were in decades of teaching, when Ghoul were finally unleashed upon the world, it trembled, as slowly but surely they enacted their glorious purpose, to save metal and crossover from the grim and humourless forces of persecution that had blighted it with their inane and vacuous music.

After years of slowly drip feeding their creative genius to the world, Ghoul are ready to release their masterpiece, Dungeon Bastards. Infused with the savage technicality of thrash behemoths and legendary crossover beasts such as Blind Illusion and Attitude, the energy and power of early Death and Sodom and the morbid humours of GWAR, Ghoul’s lifelong mission has taken another crucial step toward world domination.  Thrashing time is here…  Tim Cundle