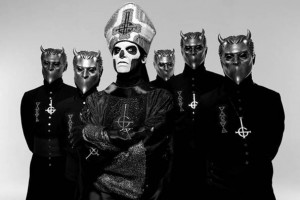 A message has been sent by The Clergy, a message that bears good news for believers…

GHOST will be coming back to the UK in March to play an extremely special seated show at London’s legendary Palladium – the world famous theatre situated in the heart of the West End.

This announcement comes as the band are part way through a full European headline tour, hitting British shores in December to continue to spread their message. Latest album, ‘Meliora’, released via Spinefarm Records in August, has been met with huge critical acclaim, and has performed incredibly well in charts around the world, reaching No. 8 on the US Billboard Chart and No. 23 in the UK.

The London Palladium first opened its doors on Boxing Day 1910, and has since been home to many of the theatre world’s most famous productions, including The Sound Of Music and CATS, plus one of UK TV’s most watched programmes, Sunday Night At The Palladium.

For Ghost, this is the perfect opportunity to present a one-of-a-kind experience fully exploring the music, the visuals and the core elements they stand for.

The show comes as part of a European run, but is the only UK date.