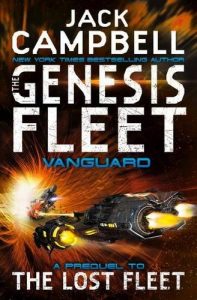 When writing my own books, not reviewing those written by others, I try to bring home what it says on the tin – unpretentious entertainment. Well, okay, it doesn’t actually say unpretentious entertainment, and between you and me books don’t come in tins, but the point is, I try to hold the fort for old-style pulp-type adventures that seem sadly to be increasingly fewer and farther between. At a time when so much seems so up its own arse, what I write – what I like – is stuff that, while convincing, is also fun to read. So much stuff isn’t fun to read. So much stuff takes its world-building far too seriously; tries to make it too real; tries too hard to be clever.

Jack Campbell doesn’t try too hard. Instead, he works hard. To be unpretentious. To entertain. Trust me, making a new universe read with the relaxed and irreverent ease he manages is anything but relaxing and easy to write. It is, in fact, so difficult that, contrary to the above, you can’t possibly try too hard to achieve it.

It’s a juggle and the balls are easy to fumble – but Campbell keeps them in the air. The result is that even though The Genesis Fleet: Vanguard is a prequel to his popular (so popular it’ll soon be a Titan comic) Lost Fleet series, and therefore doubly hazardous to introduce to an incoming reader, this in no way alienates if, like me, you’ve never read Campbell before. His is a fully-realised universe and one immediately accessible, penned in a deceptively simple and inviting style that belies its epic scope. True enough that its backdrop – humankind with FTL travel colonising the galaxy – is a story told a million times before, but it’s what Campbell does with this backdrop that works so well. It’s human-on-human, injuns-orbiting-the-wagon stuff. Bad guys versus good guys, struggling to survive against insurmountable odds. Back-to-basics space-opera with internal politics that manage not to be boring, and involving genuinely likeable leads. If a bonus were needed, Campbell has an enviable talent for conveying the sheer vastness and so often ignored three-dimensionality of space, no better exemplified in the choice so many colonists make to ‘go down’ rather than ‘out’, heading for the sparser colonised regions of the galaxy to get as far away from Earth as they can. Faster-than-light travel or not, distance is a big thing in this book, and again Campbell makes great work of how lonely and helpless it can feel to be so, so, very, very, far, far away.

Rob Geary, Mele Darcy, Carmen Ochoa and Lochan Nakamura are out there, each fighting in their own way for the future of Glenlyon and colonised space. I’d send my own girls, Kali Hooper, Ginny Dare and Trix Hunter to help, because they’d fit right in, but none of them have a jump-ship. Yet. So, in the meantime, why don’t you, dear reader, go join the fight instead? Mike Wild