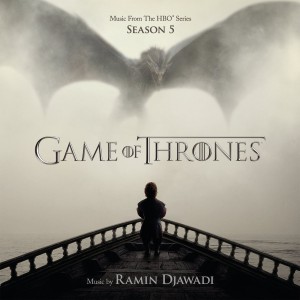 Game of Thrones (Music from the HBO series: Season 5) – Ramin Djawadi (Sony Music)
Sometimes it’s almost too easy to forget how much impact music has on a show, especially when that show – as ‘Game of Thrones’ does – thrives on shock twists, turns, death and almost endless grizzly spectacle. And as enjoyable as all that is, it often relegates the music that drives the emotional undercurrent of the show into sixth or seventh place in the list of things you should be enjoying if your brain hadn’t been battered into submission by everything else that was going on. So, now that season five of ‘GoT’ has finished and we’ve all had time to digest and get over that ‘ending’, it’s time to finally let the music do the talking, which it does in grand fashion. Ramin Djawadi’s score takes you on a journey fraught with emotion; from joyous celebration to the depths of sorrow, as each movement, each song washes over you and floods your imagination with memories and a host of imagery. Close your eyes and you’re in Westeros; sword in one hand, quill in the other. The ring of steel on steel, the hushed whispers of hidden schemes, the temptations of the flesh and the lust power overwhelming your senses in an orgy of blood, sacrifice, honour, pain, redemption and retribution. This record and these songs, they are the blade that helped forge the entire grandiose extravaganza and they will help to ease the pain and loss they you feel deep in your soul. And they will continue to do so until the start of Season. So wield them well… Tim Mass Movement