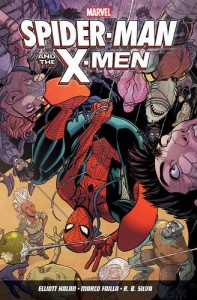 Spider-Man and the X-Men – Elliott Kalan, Marco Failla, Diogo Saito & R. B. Silva (Marvel / Panini)
It’s no secret that that I’m a massive Spider-Man fan and have been since I was knee high to a grasshopper (which has always struck me as an incredibly odd thing to say, but I like it and I’ve been looking for a reason to use it for years and now I’ve finally found one. So there) and firmly believe that when Spidey has a good writer and great artists on his side, then there isn’t another hero in the Marvel Universe who can touch him, or even come close to matching his brilliance. And, in ‘Spider-Man and the X-Men’, well, Spidey’s hit a home-run and knocked the ball right out of the park, because Kalan, Failla, Silva and Saito have proved themselves to be, in the six issues collected here, the web-slinging, wall-crawling dream team. That having being said, gather round folks and let me tell you why ‘Spider and the X-Men’ is quite possibly one of greatest Spider-Man books that you’ll read this, or any other, year.

Kalan, like all great Spider-Man writers, has an innate understanding of what makes Pete tick, and effortlessly captures the self-deprecating humour that manifests itself in his relationships and one liners and his unswerving loyalty and dedication to following Uncle Ben’s mantra and his dedication to being the best hero he possibly can, often at his own (and those he loves’) expense. It’s this incredibly well rounded and defined Spider-Man who takes centre stage in this back-to-the-classroom tale that sees him fulfilling one of Wolverine’s last wishes by teaching a class of social misfits at the Jean Grey School for Higher Learning, or as most folks call it, Mutant High. But Spidey isn’t just there to teach, he’s on a mole hunt, which due to the fact that neither the rest of the faculty or his students trust him, is made ten times more difficult than it should be, which is pretty much par for the course when you’re stuck with the Parker luck. As the story evolves, and Pete and his new “team” get to know each other by fighting dinosaur men (All hail the return of Stegron!), alien hordes, mutant clones, trans-dimensional reality television moguls and the rest of the staff at the school, they slowly begin to respect and trust each other, which they need to do and then then some if they abundance if they have any hope of surviving Professor S’s class.

Built around the relationships that are forged between teacher and pupil, ‘Spider-Man and the X-Men’ thrives on its snappy dialogue, insane pace and the incredible characterisation which fills every page. Talking of which, it would have been all too easy to let Spidey do everything, but Kalan flesh’s out each and every one of supporting cast, giving everyone involved their own identity, creating fully rounded characters that the reader actually cares about, before plunging them headlong into life-threatening, sound the alarm bells, red alert style uber danger. Then there’s the artwork, which simply radiates energy, and a slightly retro feel that captures the tone and soul of everything that’s happening in every panel perfectly. You’ll laugh, you’ll cry (well, actually, you won’t cry unless you have some sort of disorder that makes you cry while reading comics but…you get what I’m saying right?), you’ll punch the air in delight while screaming ‘Yes!” repeatedly and you’ll want to read, and enjoy, it, time and time again. But most of all, you’ll love it. I did… Tim Mass Movement