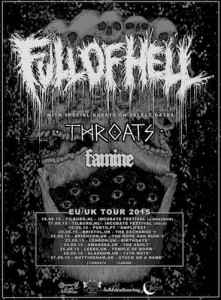 The pulverizing quartet Full of Hell are touring Europe this September, kicking off with a residency at Incubate Festival where the band will perform a collaborative set alongside noise anti-hero Merzbow (with whom they released a collaborative album in November last year) as well as a regular band set. The band also makes it’s first appearance in Portugal at Amplifest, playing alongside Altar of Plagues, Converge, Amenra and more. The tour is rounded out with headlining shows throughout the UK, with special guest support coming from English heavyweights Throats and up and coming Leeds band, Famine.

Full of Hell & Merzbow bursts free of the boundaries laid down by decades of convention in heavy music, and makes one hell of a racket as it does so. With the legendary master of noise Masami Akita (aka Merzbow) on board, Full Of Hell only up the intensity, inserting yet more layers of perplexing static and seditious feedback to the already chaotic and brutal sound picture.

You can listen to “Gordian knot” via soundcloud here.