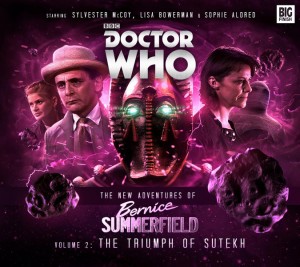 Doctor Who: The New Adventures of Bernice Summerfield Volume 2: The Triumph of Sutekh – Starring Lisa Bowerman, Sophie Aldred, Sylvester McCoy, Diveen Henry, Gabriel Woolf, Nicholas Briggs, Sakuntala Ramanee, Matthew J Morgan, Dan Bottomley, Rachel Atkins, Matthew Bates, Guy Adams & Naomi McDonald & Written by Justin Richards, Una McCormack, James Goss & Guy Adams – 5xCD / Download (Big Finish)
‘The Triumph of Sutekh’ could have been written for me; it’s everything that I love about Doctor Who. The Doctor, Benny, Ace and the return of an old foe in a break-neck, breathless adventure that’s clever, exciting, absorbing and adds extra depth to the familiar characters while introducing intriguing new faces and building on the mythology of the ever expanding Whoniverse. Featuring a plot that sends heroes and villains alike spiralling from ancient history to the far future, and from the sands of Egypt to the long dead plains of the Red Planet, the second volume of ‘The New Adventures of Bernice Summerfield’ opens with a bang and ends in pretty much the same fashion. Which means that if you’re a long term fan of the series (like, yours truly), it’s business as usual for Benny so you’ll know what to expect; but if you’re a newbie, then be prepared to hit the ground running because Benny’s adventures thrive on adrenaline, intricate story-telling, razor sharp dialogue and no-end of ‘damn, didn’t see that coming’ surprises that fuel the high octane drama and help keep the drama tight, focussed and on target.

Bernice’s new series begins with the discovery of an Osiran pyramid on a war ravaged Mars in (strangely enough) ‘The Pyramid of Sutekh’, Benny soon finds herself struggling against both The Doctor and a revived Sutekh in a fight for not only her own survival, but that of the entire Universe, in a tale that feels like a head on collision between the works of Edgar Rice Burroughs and Indiana Jones. Except it happens in space, well on Mars (so John Carter would have been happy) and its set in the future. Almost as soon as she’s finished dealing with killer mummy robots and strange alien technology, Bernice is catapulted, along with Ace, to twenty first century Earth in an attempt to locate an incredibly important artefact and in ‘The Vaults of Osiris’ ends up infiltrating a smuggling ring run by cultists at (as usual) exactly the wrong moment, as their deity finally grants them everything he always promised he would. His gift of death. From there, and barely escaping the clutches of her enemy, Benny ends up in ancient Egypt in which she’s mistaken for a god, embraced by royalty and reunited with an ally who seems to have no memory of her. But it isn’t long before trouble comes knocking in ‘The Eye of Horus’, as Sutekh stakes his claim on the kingdom of Pharaohs, throwing families into turmoil and turning friends and lovers against each other in a vivid, wildly entertaining and exciting alternate exploration of one Egyptian histories darker, and lesser known, chapters. All good things must come to an end though, and the battle against Sutekh culminates in ‘The Tears of Isis’ in which the Earth falls victim to the Osiran and The Doctor finally reveals his end game in a story that portrays the apocalypse in a blackly humorous and very British fashion and embraces the cyclical nature of time and the eternally repeating cycles of life and death that concludes proceedings in a fitting and satisfying manner. Oh, and did I mention that nearly everyone, at some point in the story, dies? Well, they do. Lots.

Wonderfully written and performed, ‘The Triumph of Sutekh’ is just that. A triumph, that not only brings a woefully neglected and ignored enemy back in a pulse pounding and riveting story, but also opens a universe of endless possibility for Bernice Summerfield allowing her to do what she does best. That is, saving the Universe. Albeit this time, with a little help from The Doctor and Ace. Cracking stuff… Tim Mass Movement