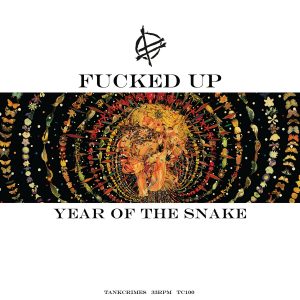 Never a band to stand on convention, Fucked Up has always done things their own way. They’ve never allowed the Hardcore “rule book” or punk rock standards and practices to get in the way of doing what they do. And what they do is so far out there, it’s unlike anything else you’ll ever hear. Year of the Snake, the latest entry in their “Zodiac Series”, while being half an hour long is comprised solely of two songs. The epic Year of the Snake, which during its twenty four minute duration veers between teeth rattling new wave influenced punk rock and trippy, spaced out Eastern inspired hippie style mysticism and sounds somewhat akin to the Necros jamming with Hawkwind after consuming LSD soaked anti-establishment literature.  It’s a head fuck and a half and both loosens up and prepares its audience for the Pink Floyd influenced Passacaglia which burrows its way into your skull and hangs out in your occipital lobe for days, whispering sweet nothings to your imagination and promising all sorts of forbidden pleasures. Year of the Snake is fucked up in name and fucked up in nature, but I wouldn’t have it any other way. Fuck yeah… Tim Cundle