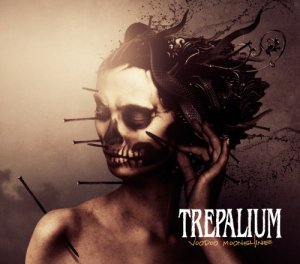 Every so often there comes along a band who injects the mental back into metal; a band who reminds us all of the importance of simply having a good time. Stepping into the frame are French boogie death metal/swing metallers TREPALIUM, who are pleased to announce their new EP Voodoo Moonshine, scheduled for UK release on February 9th.

Have a watch of the first video from the EP HERE.

A tantalisingly unique cocktail of death metal attitude and 1930s-esque New Orleans jazz swing and bounce and booze, Voodoo Moonshine is Trepalium’s fifth studio release. A short but sweet collection combining voodoo mysticism and prohibition speakeasy culture, Trepalium serve up an enticingly potent form of foot-tapping groove metal. So strong is the swing that you’ll find yourself nodding along automatically – any listener who can resist the urge is either amazingly strong-willed, or just stone deaf. Keep an ear out for the band’s accompanying jazz woodwind/brass group, as well as the appearance of Gojira’s Joseph Duplantier on track 2, Damballa’s Voodoo Ball.

An active band for 13 years, Trepalium are well-known in their native France. Having already sold thousands of albums and undertaken two tours with Gojira, as well as playing Hellfest four times, Trepalium are sure to draw many more listeners under their voodoo hoodoo.