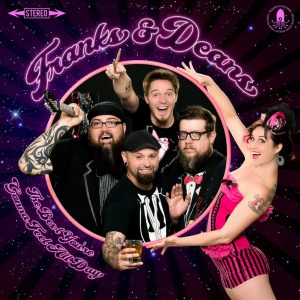 Well hey there Daddy-O, if you thought the fifties were long gone and rock’n’roll was dead then you’ve been hanging around cloud nine too long and spending far too much time with the Sandman. It ain’t six feet under, it’s just been given a whole new lease of punk rock life by those Las Vegas maniacs Franks & Deans*, who take the jive and swing classics that your parents (or as far as most of you damn kids…Uh,. I mean hip cats are concerned, grandparents) got down to and super-charge them with the punk rock and ska mainstays that anyone who called the eighties and nineties their own came of age with. The Best You’re Gonna Feel All Days is crammed full of punk-n-roll that’s been raised on a steady diet of uppers and beer and that’s played by the kind of hideously talented ne’er-do-wells from the wrong side of the tracks that everyone warned you about hanging out with. And from beginning to end and start to finish, it is freaking awesome. You dig? Darn right you do… Tim Cundle