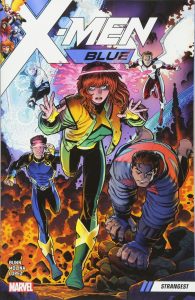 After the chaos of confusion of being dragged through time, then plunged into both the second superhero civil war and threatened with their species potential genocide when they were caught in the middle of the battle between mutant-kind and the Inhumans, no one would have been surprised if the original X-Men had hung their suits up and spent the rest of their lives relaxing on the beach of some isolated island, sipping cocktails and watching the sun rise and set while letting the world deal with its own piddly, and occasional extinction level, problems.  So, it’s more than a little uplifting to see them getting straight back in the saddle, even if the company that they’re keeping these days is more than a little disturbing and for most heroic types, disconcerting and slightly off-putting.

See, while they’re led by Jean Grey in the field, the real power behind the new original X-Men team and their commander in chief who sends them to save mutants, humans and the world alike is Magneto. Having, again, realised the error of his previous ways and, yet again, having been inspired by the memory of Charles Xavier, he’s recruited the Jean’s squad to make Earth better for everyone. And in Strangest, their initial missions see Magneto’s mutant heroes facing old foes, Sentinels reprogrammed for a very specific and ultimately horrific purpose, recruiting a very familiar face (one that every X team should have an incarnation of), exploring the many pleasures that their new base has to offer and discovering that they’re not the only team of gifted vigilante’s operating from, and within, Madripoor.

Cullen Bunn has never been one of those writers who believes in half measures or doing things the easy way, and as such Strangest is littered with sub-plots and secrets, with most of the players consumed by, and focussed on, their own agendas. Richly detailed with beautifully complex characterisation, fraught, believable interaction and punchy dialogue, Strangest has set Jean’s X-Men up with more than enough ideas and potential storylines to keep this book on course for the next couple of years. He’s done it again and with more than little help from Molina, Height, Buffagni, Lopez and Smith who give his vision depth, feeling and life thanks to their knockout art, Cullen Bunn has waved his creative wand and pulled another gold plated, diamond encrusted rabbit out of his hat. Blue just became my favourite shade of mutant colour…  Tim Cundle