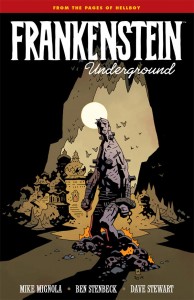 Mike Mignola’s Hellboy universe can never be called confined. Expanding from the past to the present day, it encompasses vampires, demons, witches, and Elder Gods (hello Chtulhu Mythos!) and so much more.

In Frankenstein Underground, Mignola focuses on the monster Dr. Frankenstein made, though in this story he’s actually called Frankenstein. After escaping the tortures of Mexico in 1955 he’s found by a witch who heals him and shows him an ancient temple of Gods. His peace is short lived however, as the witch is killed by a demon which caused Frankenstein’s rage to boil over destroying the temple, which sends our misunderstood monster plummeting into a underground world which is inhabited by a group of survivalists who are hiding a dark secret as well as one of light.

Mignola seems to thrive on bringing strange creatures to life and having them feel and think, having them truly live through words. With Frankenstein he makes the monster more human than the humans he encounters. As in the classic novel, he is hunted and misunderstood and never truly understands why which drives him to hide and wish for death. Artist Ben Stenbeck helps Mignola realize this world, as he has on the previous occasions he’s worked with him. While he doesn’t share the minimalistic style of Mignola, his art is perfect the story and the end result is better for it. While I’m not too sure about the pancake nipples of Frankenstein, Stenbeck makes up for it with a very cool nod to the classic Frankenstein films from Hammer Studios. I’m actually looking forward to seeing where the story of this tortured monster goes and what happens to him next. Although, as with all good horror tales while I’m sure it’ll be fantastic for the audience, I’ve got a funny feeling that it won’t be so great for Frankenstein…  Jason Bonton