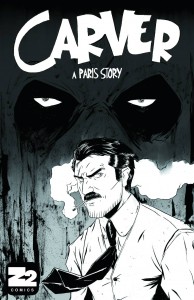 Artist Chris Hunt’s first full leap into the comics world isn’t Carver as he’s worked on books for Dark Horse, IDW, and others. Yet this is Hunt’s first foray on his own with his own ideas, story and characters.

Carver starts off with a hooded man named Stacker Lee talking to some unknown person, laying down rules before saying how bad things happen and those things change people. This is in reference to Carver who we meet next, following a “frolic” with a lady. Scars and bad attitude slip off of the page from Carver, while at the same time he maintains an almost overwhelming sense of stoicism. Carver is back in Paris to help a lost love find her daughter. Stacker Lee though wants Carver’s life to be a living hell and will go to great, and any, lengths to make that happen.

The story is enough to please most non-traditional comic fans, the ones that want something more than capes and tights. This is the start of a neo-noir adventure that has the potential to be a great read due in no small part to the two main characters, even though at the start of this story they seem as if they are both bad men and rotten to the cor. Hunt’s art style matches the story, as his lines and style conjure a darkness that pervades each scene. However, during one part of the book the story does get a tad confusing in terms of both the art and narrative, but it’s just a small blip, as a page later everything gets back on track. Carver is a good start to what looks to be a nice throwback to classic Hollywood noir films of the thirties in which “tough guys” took centre stage. And as an added bonus there’s a short story at the end of the book (from Paul Pope) that shows what happened on Carver’s first night back in Paris. Jason Bonton