Warning: preg_match() expects parameter 2 to be string, object given in /var/www/vip4/sites/vip6102689/httpd/htdocs/wp-includes/formatting.php on line 4866
 For A Few Souls More - Guy Adams - Mass Movement
x
Spread the love 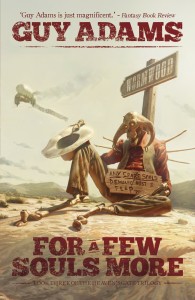 For A Few Souls More (Book Three of The Heaven’s Gate Trilogy) – Guy Adams (Solaris)
“The uprising in Heaven is at an end and Paradise has fallen, becoming the forty-third state of America. Now angels and demons must learn to get along with humans. The rest of the world is in uproar. How can America claim the afterlife as its own? It’s certainly going to try as the President sets out for the town of Wormwood for talks with its governor, the man they call Lucifer.
Hell has problems of its own. There’s a new evangelist walking its roads, trying to bring the penitent to paradise, and a new power is rising. Can anyone stand up to the Godkiller?”

It was a sad day for me when turned over and finished the last page of ‘For A Few Souls More.’ Guy Adams, has written a blinder of a tale, mixing up flat out old-school, dime store novel spaghetti western style gritty action where the bad guys rather than wearing black, are the very worst kind of demons. You really need to read the previous two instalments to be able to fully appreciate ‘For A Few Souls More’ as there’s lot of knitting together loose ends from previous plot arcs, and characters that were “somehow” forgotten turn up and finally fulfil their purpose and ply the roles they were created for. In ‘For A Few Souls More’, which has been as entertaining and engrossing in terms of action, plot and characterisation, Adams has demonstrated his incredible talent and way with words on every page in each of the three novels in the trilogy and deserves to be recognised as a genuinely gifted writer. Thoroughly recommended. Gav