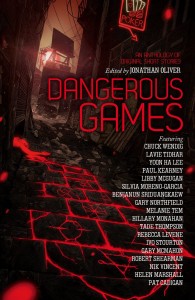 Dangerous Games. (An Anthology of Original Short Stories) Edited by Jonathan Oliver (Solaris)
“Roll the Bones!
In a world ruled by chance, one rash decision could bring down the house, one roll of the dice could bring untold wealth, or the end of everything. The players have gathered around the table, each to tell their story – often dark, always compelling. Within you will find tales of the players and the played, lives governed by games deadly, weird, or downright bizarre.
Multi-award winning editor Jonathan Oliver (The End of the Line, House of Fear, Magic, End of the Road) brings together new stories featuring a diverse collection of voices. Here you will find incredible new fiction by Chuck Wendig, Silvia Moreno-Garcia, Lavie Tidhar, Benjanun Sriduangkaew, Paul Kearney, Libby McGugan, Yoon Ha Lee, Gary Northfield, Melanie Tem, Hillary Monahan, Tade Thompson, Rebecca Levene, Ivo Stourton, Gary McMahon, Robert Shearman, Nik Vincent, Helen Marshall, and Pat Cadigan.”

When Solaris release an anthology, no matter what the theme, you know it’s going to be worth an afternoon or two of your time. And when it’s edited by the highly regarded Jonathan Oliver, again, you know it is really going to be worth your time. ‘Dangerous Games’, the latest collection from Solaris, this time themed around, and on, games (see what they did there?) is no exception to this well established rule.

As ever the line-up of authors is exceptional. Paul Kearney, Ivo Stourton and Chuck Wendig delivering the stand out stories, while relative newcomer Libby McGugan’s entry, while building on her debut Solaris novel ‘The Eidolon’ which I had the real pleasure of getting to review last year, weighs in effortlessly with the big boys and stands shoulder to shoulder with the best of them. The stories tackle everything from battle re-enactments through to video games, and as with every Solaris anthology, quality control is set to maximum and as such each contribution knocks you for six. Game on! Gav