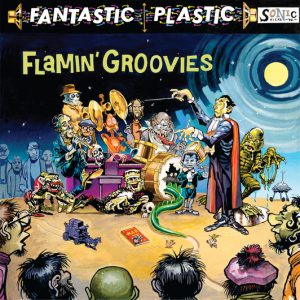 Bands with a career as extensive as the Flamin’ Groovies can often find themselves between a rock and a hard place. Do you continue being a reformed nostalgic live act playing the fan favourites or do you take the plunge and offer up a new album? Some 38 years since their last penned album, Cyril Jordan and Chris Wilson have opted for the latter. As with these new album plunges, avid fans of the band will hold their breath with trepidation whilst whispering “please be good, please don’t ruin the legacy” to themselves.

I’m pleased to report that the Flamin’ Groovies have only gone and pulled it out of the bag with Fantastic Plastic. The unthinkable has happened; the songwriting duo are back and have made an album that takes off where Jumpin’ in the Night left us in the late 70s. I’m unsure what recording techniques were used on this new record but the sound on the vinyl transports us straight back to the good old analogue days. Maybe that’s just credit to Jordan and Wilson on how they make an unforgettable and timeless sound.

What the Hell’s Goin’ On opens up the album with a riff Keith Richards would be proud of. It shuffles with a Rolling Stones groove whilst threatening to burst into their own Shake Some Action. That is not a criticism. The Groovies realise their heritage and are more than willing to doff their cap with a cheeky wink. The same could be said for End of the World that follows with trademark Jordon guitar stabs as echoey licks give a nod to the Blue Öyster Cult.

The Flamin’ Groovies aren’t adverse to a cover or two and alongside the 10 originals on Fantastic Plastic we get takes on the already awesome Don’t Talk to Strangers by The Beau Brummels and I Want You Bad by NRBQ. The latter I last heard covered by J. Mascis of Dinosaur Jr, and the Groovies also do it justice here.

Side two kicks off with the 2016 7″ single Crazy Macy and the flipside also gives us more tender cuts in the shape of Lonely Hearts and Fallen Star before beefing things up with the blues led Just Like a Hurricane.

The penultimate track I’d Rather Spend My Time is a rather splendid instrumental that wouldn’t go amiss on an uber cool Tarantino soundtrack. Fantastic Plastic leaves us fittingly with Byrds-esque jangly guitars and beautiful power pop vocal harmonies on Cryin’ Shame.

I should also mention the outstanding artwork from the paintbrushes of Cyril Jordan on the front sleeve. It is truly mesmerising and my eyes have been lost in it equally as much as the music itself. Oh, and also look out for a cassette version of the album from Burger Records.

What the Flamin’ Groovies have achieved with Fantastic Plastic is nothing short of remarkable. With original bassist George Alexander also in the recording frame, Jordan and Wilson have produced a piece of work that harks back to their 70s days but without sounding stale in modern times. There’s enough here to make old fans dance in their sharp suits and Cuban heels, whilst newbies could do a lot worse than to start with this album before delving into the back catalogue. This is the Flamin’ Groovies… NOW! Ginge Knievel