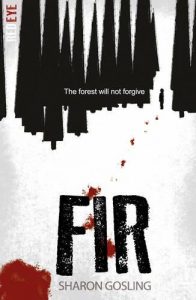 The latest offering from Sharon Gosling is clearly aimed at the youth adult audience, but make no mistake FIR is as creepy as it gets. Set in the stark backdrop of northern Sweden, the Stromberg family has moved away from the big city, bought an old plantation house and hired its staff, including the mysterious Dorothea, to make a new life for themselves. But the plantation has an evil and bloodthirsty past and it’s not long before the land surrounding the house starts making its presence known. And like they are in all good horror stories, the warning signs are there, but are ultimately ignored.

Told from the disgruntled teen girl’s perspective, FIR’s depth of story comes from its surroundings, which often makes the reader feel very claustrophobic. Gosling does a wonderful job of creating the feeling of isolation that runs throughout the book, and in places it’s somewhat akin to The Shining. She also delivers a lesson in Norse mythology, which serves to enhance the mood and gives the setting extra historical significance. And each chapter cleverly begins with a couple of lines of poetry, spoken by the impending evil, which builds on, and adds to, the growing sense of hopelessness.

This is my first foray into the work of Sharon Gosling but it won’t be my last and given how good FIR is, I’ll be seeking more of her work out. Perfectly paced, nerve shreddingly tense and creepy as hell... Chris Andrews