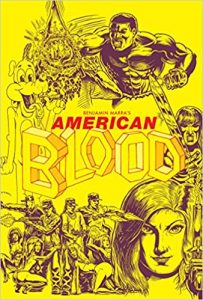 Benjamin Marra is probably the closest thing in comic books to the legendary Hunter S. Thompson. His satirical look at American sub-cultures in all its graphic detail have been gracing the pages of Traditional Comics for over a decade, and now with American Blood, we finally have a collection of some of his best work that’ll make you swoon with admiration and feel more than a little nauseous. Hey, nobody said it was an easy read, but then great literature never is. Nor should it ever be.

American Blood kicks off with Gangsta Rap Posse an X-rated and uber violent look at the late eighties and early nineties hip-hop scene in L.A. Every single gansta rap movie you ever saw is parodied here. Indeed, the Gangsta Rap Posse themselves are a very obvious parody of N.W.A.  It’s not all brainless fun though. There is a serious undercurrent in most of the stories in this book, whether it’s The Rodney King riots or black slavery in America, each story has a moral code buried somewhere in it. Lincoln Washington is the slave in question in O’ Sins of Men. Now a free man, he just wants to go home and live his life, but the town’s people are not happy with his presence and a trap is set for him. In The Incredible Adventures of Maureen O’ Dowd our sexy journalist is hell bent on bringing down the Bush administration and the CIA are on her tail. The only thing she is worried about however is making her date with George Clooney.

There’s plenty more action in the pages of this delightfully retro looking comic book. While Marra’s art is relatively simple, his writing and its moral, social and ethical messages are incredibly strong. It’s like a Tarantino movie in comic book form… Chris Andrews