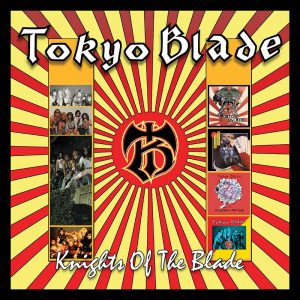 In the 80’s, when spandex was tight and hair was abundant, the New Wave of British Heavy Metal scene spawned many a decent band. Tokyo Blade exploded with their first full length release in 1983, and this box set spans the band’s three-album career as well as a bonus disc of rarities, Singles & EPs. Disc 1 brings us the self-titled debut-offering, and a band keen to impress. Held together with paced guitar riffs and high-end vocals the band crafted a style equal to many already established luminaries. The unmistakeable guitar tone of the 80’s and the formula song structures sound fresh today even for long in the tooth genre fanatics from the first time around, so they are sure to win new followers amongst newcomers to the genre. Comparisons with early Maiden will spring to mind (without D’ianno’s vocal gruffness). Tokyo Blade aren’t short of quality tunes, and the production certainly stands the test of time which delivers a heady, metallic duel punch.

Disc 2 brings us Night of the Blade and the now famously notable cover artwork. Once again the Salisbury lads expand on their now established take on British Metal with a slightly bigger sound. As soon as Someone to Love blasts from the speakers it’s clear these guys are leaving the pubs and smaller clubs in search of larger venues and bigger crowds. New vocalist Vicki James Wright has a slightly higher range cutting a cleaner sound and complimenting the extra depth created both musically and in the production. No major shift in style, just bigger, more professional, more ambitious and even more vibrant.

Then to the third album: Blackhearts & Jaded Spades released in 1985 (and here found on Disc 3) where evolution really kicks in. More melodic and more radio friendly, for the first time the keyboards were used to augment the melodies in a way that may cause the listener to question the songs. Dirty Faced Angels, and Tough Guys Tumble still exude the precision delivery and top quality musicianship you’d expect from the New Wave of British Heavy metal, but you can begin to hear the band leaving behind that niche and embracing the influences and opportunities of the U.S. and Japanese markets which were so necessary back then if you wanted to both play music and pay the bills.

Finally to Disc 4 and the nineteen songs collected for Singles & EPs nicely round off the collection, with the harder to find 7” and 12” tracks being a real bonus. Unless you had these back in the day, you would probably never come across the likes of the Madame Guillotine EP or Undercover Honeymoon 12”. This fantastic collection is backed up with a sixteen-page booklet of lengthy and detailed liner notes and time relevant photographs, so if you missed out first time around, here is your second – and maybe last- chance.  Mark Freebase