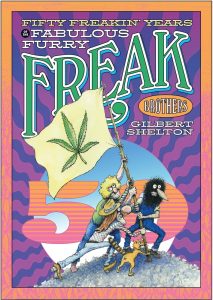 While I’m pretty old, I’m not ancient enough to have been around since the heyday of counterculture comics and wasn’t even a twinkle in my daddy’s eye when they were at the height of their popularity. Embodied by the likes of Robert Crumb and the man responsible for creating the Freak Brothers, Gilbert Shelton, it was a movement that satirised and ridiculed the establishment through the pages of a familiar, homespun and up until that point thanks in no small part to the Comics Code Authority, relatively inoffensive medium.  That all changed with the emergence of the underground press, which tore up the rulebook and did things its own way, much to the mainstream’s chagrin.  And the Freak Brothers were right at the front of, and leading, this subversive comic book evolution.

Having first appeared during the same year as the Summer of Love, the Fabulous Furry Freak Brothers have fared far better than most of the other artistic endeavours that were born at the same time. In fact, for a trio of octogenarian drop-outs, they’re still looking rather spry thanks to the timeless razor sharp art and wit of Gilbert Shelton.  To me, they’re still the same goofball, anti-authoritarian “rebels” who thanks to a mixture of ineptitude, luck and just being in the right place at the right time, have managed to carry on their ideological crusade and quest for herb, since I was first introduced to them during the mid-eighties by one of my friend’s older brother .

Funny, acerbic and oddly just as relevant today as they’ve always been, in the brand new strips featured in Fifty Freakin’ Years, yesterday’s heroes without a cause are forced to confront the modern world’s social issues and find themselves coming face to face with teenage trends, the absurdity of twenty first century protest and relationships and find a novel ways to ridicule the vicious, merciless and barbaric acts that have come to epitomise the woeful face of “revolution” in the digital age.  Coupled with some of the rarer and more fantastic and far-out Freak Brothers related art and a rather dry history of the triumvirate of the would-be hippie radicals written by their father, who kind of shrugs his shoulders and tells it exactly how it was and either fails to understand just how significant his characters were and are or just doesn’t care (I prefer to think it’s the latter as that’s more in line with my image of what Shelton is like in real life), Fifty Freakin’ Years is proof positive that the Freak Brothers and Gilbert Shelton are still just as groovy as they’ve always been. Far out man, far out… Tim Cundle