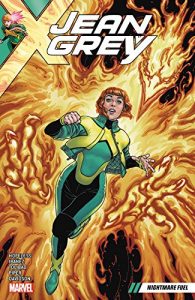 One Jean, two Jean’s, three Jeans, four and… Okay, we’re all kind of familiar with multiverse theory and the ideas of parallel worlds and dimensions and the manifold different versions of the same person and people that exist within them, but Jean Grey and the rest of the original X-Men are sort of unique*. Having been brought into the future, they’re present and past selves co-exist with each other. Except for Scott Summers and Jean Grey. Because their present day selves are dead, which probably explains why the Phoenix force seems hell-bent on pairing itself off with past Jean, because her present self was just about its favourite host and one Jean Grey has to be pretty much the same as another, right? Wrong. That’s the kind of faulty all powerful enetity logic that leads to civilisations collapsing and galaxies being torn apart atom by atom. And having heard first-hand what happened the last time the Phoenix took an interest in her, sixties Jean wants nothing to do with the Phoenix and isn’t going down without a fight.

Which is why, in Nightmare Fuel, she sets out to learn all that she can about, and how to fight, the Phoenix force from some of her fellow heroes who previously fell prey to it. It’s a quest that sees her fighting side by side with some of the toughest hombre’s on the face of the planet and which takes her from the deepest depths of the ocean, to windswept mountain peaks before culminating in Brownstone in New York City and ultimately leads to her discovering that sometimes you shouldn’t try to ignore the voices in your head and that some questions are best left unanswered.

Full of snappy, witty dialogue, lightning quick action and the sort of full throttle plot that would get a “two thumbs up” nod of approval from Chip Foose, Nightmare Fuel pits Jean against herself, the universe and the oncoming Phoenix force. Questioning the inevitability of fate and the plasticity of destiny, Dennis Hopeless flexes his cranial muscles to capacity and allows his imagination to run wild in this artistically sumptuous and gorgeously detailed story that’s almost certainly a precursor to, and setting the stage for, the upcoming Phoenix Resurrection saga.  Which is kind of cool and all, but don’t let that put you off as Nightmare Fuel stands on its own merits and shows the world that there’s far more to Jean Grey than the woman it thinks of “just” being the omega level telepath leader of an X-Men team.  The Phoenix isn’t going to know what hit it… Tim Cundle

*I know, it’s difficult to be sort of unique. But this is the four colour universe and somebody has always done something similar before and there’s nothing new under the sun in the funny pages and yadda, yadda, yadda. Apparently. However, I still think that the X-Men of the past being stranded in their future and our present is all kinds of awesome and a very cool twist on an all too often underused Sci-Fi trope. Which makes it sort of unique.