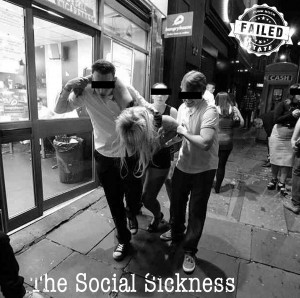 For such easy going guys Failed State certainly seem angry, and I mean seriously angry. 12 minute long blasts of vitriol directed at the Tory Government, Businessmen and Hipsters amongst others. Musically the band aim for the deceptively metallic intro followed by high speed hardcore with elements of Chaos UK/Disorder and Scandinavian Hardcore  underpinning the whole thing. There’s some nice noodly riffs backed up by a solid rhythm section and some suitably aggressive vocals. Some of the songs seem to end abruptly like they couldn’t be bothered to finish them but that just adds to the anarchic feel behind these songs. Three tracks are reprised from the bands demo (‘Raped By Suits’, ‘Nation Violation’ and ‘Fat Cats’) but it’s the newbie ‘Get Back In The Sea’ which really stands out as a prime piece of Hardcore hostility aimed at knuckle draggers in general. A strong step up from the demo and definitely worth checking out if you like your music short, sharp and to the point.   Ian Pickens