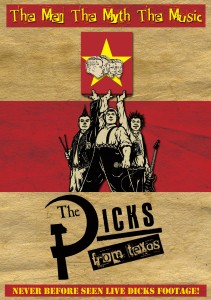 A bit of a treat for us 80s USHC fans given the relative scarcity of Dicks material available.

If you’re not familiar with them, The Dicks were an Austin  band fronted by the openly gay, cross dressing communist Gary Floyd. Musically, although part of the nascent Austin punk scene, the band were quite experimental, particularly guitarist Glen Taylor whose mixture of punk, jazz and funk helped shape the future sound of bands like Scratch Acid, and vocalist Floyd who brought a soulful, blues-iness to the proceedings.

The ‘Dicks from Texas’ follows the now well-trodden path of talking head interviews interspaced with live footage and flyers, particularly from the Dicks early period when they were only a Poster Band (a band that existed on flyers posted as a practical joke and something of an Austin tradition).

Featuring mainly interviews with the band’s members and friends, with the odd peer perspective (Ian MacKaye, Henry Rollins, Randy ‘Biscuit’ Turner) the interviews  run more like friendly recollections  of the late 70s/early 80s Austin scene, giving this documentary the same kinda vibe that Texas HC scene seems to have comprised of back in the day, a consensus of supportive outcasts who hung together making art, music and social statements.

Giving Floyd’s aggressive stage delivery it came as a surprise to find him speak in such gentle, lisping tones and at times, between my increasing deafness, the thick Texan accents and the low quality of the voice recording it was difficult to make out everything he was saying (an issue which occurred with other interviewees too).

The film celebrates the Dicks not so much from a musical perspective (although both Rollins and MacKaye attest to the bands musical chops), but from a social perspective; the band acting as the glue between the hippies, gays, punks, drunks and drug users that made up the Austin scene in the early 80s.

As a final note it’s worth pointing out that the live footage is a real treat and worth the price of picking up this DVD alone.   Ian Pickens

Music
One comment to “The Dicks from Texas DVD (MVD)”