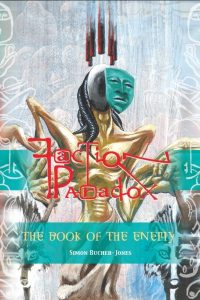 Faction Paradox, aptly, had more than one literary birth. If we ignore the one or two mentions that came earlier in the New Adventures (Grandfather Paradox was alluded to in Christmas on a Rational Planet, for instance, and Dead Romance was a Faction novel in everything but name), their first full-fledged appearance was in the Doctor Who novel Alien Bodies.  But as the Faction’s story and the story of the War in Heaven continued in the Eighth Doctor Adventures, it quickly became apparent that events were diverging from Lawrence Miles’ original plan. By the time The Ancestor Cell was written, Miles’ ideas had, in his mind, been totally corrupted.

As a result, Miles made numerous “tweaks” to the Faction Paradox universe, rebranding the Time Lords as “the Great Houses”. TARDISes became “Timeships”, the Master took on the role of “the War King” and Gallifrey became simply, “The Homeworld”.

Two things heralded the arrival of this independent Faction Paradox universe. The first was the arrival of six BBV audios, beginning with The Eleven Day Empire. The audios featured cousin Justine, who had previously appeared in Alien Bodies, and cousin Eliza, who had appeared in Dead Romance as Christine Summerfield. Despite BBV’s slightly more primitive sound – at least when compared to that of Big Finish – the audios were spectacular; they told the story of the Eleven Day Empire’s destruction at the hands of the Sontarans, and the rise of Lolita, a “new kind of history” that would shake the foundations of the Great Houses. Eventually, with the folding of BBV’s audio line, the series would be handed over to Magic Bullet Productions, who would recast the main characters and send the story spiralling in a new and fresh direction, a direction that included the involvement of Doctor Who’s Sutekh, and the god-like Osirian race.

But the audios were just the beginning. The second – and arguably, much more important – thing that marked the arrival of Faction Paradox as an independent property was the publishing of a book that would act as the “bible” of the Faction Paradox Universe – the oft-mentioned “spiral politic” – for much of the next two decades. Edited by Lawrence Miles and featuring contributions from writers throughout the literary world of Doctor Who, The Book of the War detailed all the intricacies of this shared universe. It was a magnum opus: part encyclopedia, part historical narrative and part science-fiction epic; filled with puzzles, mysterious links and with “Easter eggs” hidden throughout, The Book of the War remains, 18 years later, the definitive work on the Faction Paradox universe.

At least until now.

When Obverse Press got their hands on the Faction Paradox license seven or eight years ago, nobody was really sure what they would do with it. Random Static, the previous license holder, had only produced one novel (the highly acclaimed Newtons Sleep), and although Mad Norwegian Press had previously released some of the definitive Faction-based novels, they had ended the series rather abruptly. But with regards to Obverse, we need not have worried. Their attention to the Faction Paradox universe has been such a labour of love that it’s hard to imagine the universe of the Great Houses without them. From their short story anthologies to their City of the Saved collections (technically “a spinoff of a spinoff”), and finally to their insanely original novel range, Obverse has taken an already brilliant shared universe and upped the ante.

So it seemed a no-brainer that Obverse would commemorate, in a small way at least, the 20th anniversary of Faction Paradox’s first appearance (in the Doctor Who universe, at least). Technically, it was their previous release, Spinning Jenny, that marked the anniversary with a numbered limited-edition run. But it was their next release that word commemorate Faction Paradox in a wholly-original and long-awaited way. Originally touted as simply a short story anthology (Obverse has produced many such volumes since they acquired the license), it quickly became obvious that this release would be much, much more. The Book of the War examined the Spiral Politic through the eyes of the Great Houses, the Remote, the Celestis and Faction Paradox in general. But it would take The Book of the Enemy to show things from the other side.

Although not quite as exhaustive as The Book of the War, The Book of the Enemy is still a sweeping and far-reaching study of those unfortunate souls who have had direct contact with the Enemy, and the effects that these encounters have had on the timeline. Although it is not put together in the same encyclopaedic way that The Book of the War is, there is a certain…functionality to its layout and presentation. Far more than simply an anthology of short stories, The Book of the Enemy presents itself as a psychically interactive database, a series of briefing documents, journal entries, a virtual reality construct, an unpublished Sherlock Holmes manuscript, a screenplay, an autopsy report and everything in between.

Overall, The Book of the Enemy is a much darker work then the encyclopedia that preceded it back around the turn of the millennium. The War has regressed; the Great Houses have come to realize that this is a war of attrition so complex that the very souls of those involved could easily be considered forfeit. Case in point, from one of the early briefings:

“It’s still a moment to savour that our neurology registers beauty. It won’t be long before someone in the Great Houses concludes that the complex part of the brain necessary to appreciate form and colour are surplus to the requirements of the War. Then everything will be black and white, or at best faded orange and blue, and the surfaces of the world will smooth into plastic identiformations, until neuro-briefing and life are indistinguishable.”

What makes The Book of the Enemy a particularly harrowing entry in the Faction Paradox canon is its metafictional scope. One of the collection’s highlights, Philip Purser-Hallard’s “T. memeticus: A Morphology”, utilizes as its framing device the Faction’s investigation of eight seemingly unrelated objects. Alone, the items seem to bear no more significance than the starting points of eight different stories; some are McGuffins, others serve as archetypal symbols in brief flashes of narration. And although it soon becomes apparent that one of the connecting factors is that each object has had some sort of first-hand contact with the Enemy, it’s this very relationship with the act of storytelling that makes each item so dangerous. As the narrative tumbles towards its terrifying conclusion, one can’t help but wonder if the very act of reading this story has been enough to free the Enemy…

Lawrence Burton’s “We Are the Enemy” goes one step further, as the author himself appears in flashes, cycling through the suburban woodland, proposing various theories on the nature of the Enemy. “Wouldn’t you be resentful if you found out that your entire existence had been written by someone more real than yourself?” the story asks. The real Enemy, it seems, was the individual who deconstructed and watered down the initial concept of the Enemy to be something as simplistic as the Daleks in the new series of Doctor Who. Perhaps Russell T. Davies’ reboot was the real slayer of Faction Paradox.

Faction Paradox – in all its forms – has always connected very closely to popular culture, and the events related in The Book of the Enemy are no exception. Probably the best example of this is Jay Eales’ almost-novella-sized “The Enemy of My Enemy is My Enemy”. Populated by fictitious versions of very familiar individuals in the modern cultural mindset – specifically, thinly-disguised versions of J.K. Rowling, Alan Moore and Grant Morrison (as well as an endlessly-tweeting Donald Trump) – the narrative, like so many stories before it, progresses ever-ominously towards a conclusion that is as inevitable as it is preposterous; it is a grotesque, illogical and yet intensely believable comment on the nature of fiction in today’s world. “In the beginning,” the story asserts, “culture was solid-state; ice. With the arrival of the first story-tellers, the hunters who discovered that if they drew a successful hunt on the walls of their cave, they could impose their will upon the world, and make it do their bidding.”

Although The Book of the Enemy is such a wonderful mix of genres, and demonstrates so well why the Faction Paradox universe is such a preferred playground for many of the featured writers, what is even more fascinating in this collection is the way in which traditional genres are undermined and renegotiated. From the way in which Andrew Hickey plays with traditional Sherlockian storytelling tropes in his short story “The Book of the Enemy”, to the almost Lovecraftian depiction of powerful, ancient beings from another universe in Christian Read’s “Eyes”, The Book of the Enemy asks the reader to discard everything he or she knows about storytelling. And as always, there is horror: the horror of the true purpose of the Door to Null in Simon Bucher-Jones’ “The Enemy – The Hole in Everything”. The horror as the true nature of Vlad the Impaler, the dreaded Dracula, is revealed in Jacob Black’s “A Bloody (And Public) Domaine” (far from simply being a terrifying historical figure resurrected by Mal’akh cultists, his ultimate monstrosity lies in his existing in multiple timelines).

The Book of the Enemy could very well be the most important Faction Paradox book in twenty years. Editor Simon Bucher-Jones has assembled an all-star group of writers who, through so many different vehicles, explore the act of storytelling and its overall effect on the spiral politic. But what’s really fascinating is the very way in which the act of storytelling changes across the book’s rich tapestry; from the virtual reality of Helen Angove’s “Timeshare” (in which customers purchase a literal “share of time” – not unlike the way in which the Faction first established the Eleven-Day Empire) to the strange, dream-like parable that is Wilhelm Liebknecht’s “The Map and the Spider”. Nate Bumber’s “Cobweb and Ivory” possesses a similar esthetic, though one based more in hallucination than in dreams. And that’s really the continuum that seems to have given rise to these stories; like Finnegan’s Wake, The Book of the Enemy is Faction Paradox’s “Book of the Night” – a wondrous, sprawling tapestry, of Daemons and Dyson Spheres, of memes and metaphors. “We are all stories,” proclaim the opening words of Nick Wallace’s “First Draft”. In The Book of the Enemy, that is the literal truth. Peter McAlpine

Books
One comment to “Faction Paradox: The Book of the Enemy – Edited by Simon Bucher-Jones (Obverse Books)”