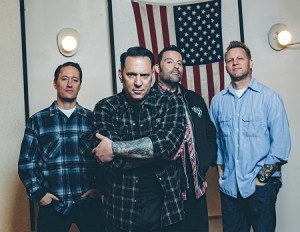 Looks like the FAT family is expanding! Perhaps you picked up the hint at our FAT Anniversary show in LA when face to face graced the stage to perform a few numbers? If you were just reveling in nostalgia as you sang along to “Disconnected” off their classic album, Don’t Turn Away, we are here to connect the dots. As of today, we can officially reveal that Fat Wreck Chords and face to face have reunited! And it gets better: this week, the band heads to Colorado and the legendary Blasting Room. There, they’ll be holed up for about a month, combining forces with the studio’s powerhouse producers Bill Stevenson and Jason Livermore to record their ninth full-length! Due out in 2016, the new album will showcase all the infectious melodies and driving guitars you’d expect on a face to face punk record, amplified by the Fort Collins production machine.

face to face, vocalist/songwriter Trever Keith comments: Returning to Fat Wreck Chords for us is a homecoming. After 8 records on almost as many labels throughout our career, we’ve definitely been through some of the worst and best of this business. The fact that after 25 years FAT is still going strong, is a testament to their commitment they have to their artists. We are excited about working with people who truly understand what we do and who we are.

Co-owner Fat Mike (NOFX) comments: face to face aren’t really coming back to FAT. We originally signed them to a two record deal. Paragraph 6 section C clearly stated that face to face (the band) must deliver two full length LP’s within the next twenty five years. They are just making good on the original contract. I knew those guys would come through!