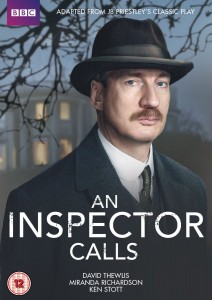 An Inspector Calls (BBC DVD)
I have to confess that I, like many others, don’t come to this piece cold. In fact, the J.B.Priestley masterpiece has been part of my consciousness for most of my life; a favourite of my parents, we saw it more than once in the theatre; it was studied by both my elder sisters in school and held as a special treat into adulthood each time Alistair Sim’s inspector graced our TV screens in the 1954 film adaptation. At first it was creepy and scary, then as I matured, it became a tense thriller, and then finally a social(ist) commentary on the British class system dressed in a spooky and claustrophobic mystery. Never before though, have I been so affected by an adaptation or production of this play as I was by this. But I move too fast.
An Inspector Calls is the tail of a wealthy Edwardian family, headed by a self made industrialist (Ken Stott) interrupted in their family celebration (symbolically taking place in the April of 1912, as the Titanic crew chose to save it’s wealthy passengers leaving the working class passengers and their children drowned anonymously below decks) by an unusual visitor: an Inspector purporting to be investigating the suicide of a young woman. As this quiet Inspector asks his sparce but pointed questions, a tale gradually emerges of a family whose unthinking, privileged pomposity and sense of class based entitlement served to impoverish, ruin then destroy the girl’s life, her spirit and eventually hope, leading to her eventual suicide. A moral tale of the power held by the upper classes over the ordinary working people told in a time, before the NHS and the welfare state, when that dynamic was at its most profound. Or that’s what I thought.
Now, with the quite astonishing performance by David Thewlis who brings a reserved and intense compassion to the piece, and the unimposing use of music, atmosphere and restrained use of flashbacks it’s a whole new ball game. Just as the play’s first performances took place in the run up to the creation of the welfare state, at this production’s heart is the reflection of David Cameron’s Britain as that self-same welfare state is eroded and the gap in power and compassion between rich and poor that leads to the victim’s descent into hopelessness depicted here, starts to look like what happened to our friend last month and could be us tomorrow.
With the previously mentioned Ken Stott being his reliably wonderful self and Miranda Richardson on form as always this was never going to be less than good, but with a subtle twist of emphasis, this adaptation renders the spooky, chiller secondary to the heart-rending and eminently avoidable fate of the suicide victim. Moving, subtle and thoroughly recommended to anyone; but if you ever considered voting conservative because you were worried about “welfare cheats” or immigrants, then this should be required viewing, if only to see the consequences of judging people as the undeserving poor. Emma Mass Movement