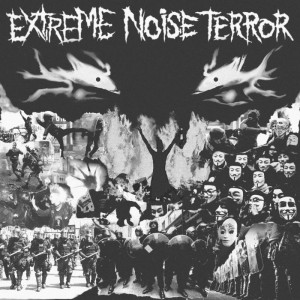 UK-based hardcore punk/grindcore legends, EXTREME NOISE TERROR, will unleash their self-titled new full-length via Willowtip Records. Set for release on November 5th, their first studio album in six years sees the band returning to their hardcore punk roots with a manic, stripped down and highly aggressive raw sound that perfectly complements the chaotic attack that saw the band become a firm favorite throughout the ’80s and ’90s with punks and metal fans alike.

Tracked at Springvale Studios with longtime producer Mark H. Harwood, the album features the lead guitar talents of guest musician Kody from Singapore hardcore punk band Minus and includes a cover of “I Like Cola” by ’80s Japanese hardcore pioneers, Outo, that sits nicely alongside twelve of the band’s fastest, most intense and catchy tracks to date. Says iconic frontman Dean Jones of the recording “This album takes us purely back to the days of A Holocaust In Your Head, Earslaughter and Phonophobia with the true original blend of frenetic, super hi-octane fueled madness mixed with a few ‘Show Us You Care’-style, catchy-as-hell, circle moshing break up bits. Our best album yet. If this doesn’t blow your head off, nothing will!”

Adds second vocalist Ben McCrow who makes his full-length debut with the band, “I was a big fan of EXTREME NOISE TERROR as a teen, long before I joined, specifically of A Holocaust In Your Head and Phonophobia. If I was going to compare this new album to anything the band’s done before I’d say it sits nicely with those two. Catchy as fuck, aggressive, ultra hardcore punk riffs, fast frantic drumming and mental vocals; I don’t think Dean’s ever sounded as insane as he does on this one! It’s raw as fuck too, no click tracks or fixing-in-the-mix type shit, instead the drums, bass and guitars were done live with the leads added after and me and Dean sharing a mic going through a seventy-six-year-old analogue valve amp. We’re all hugely proud of this album, it’s a proper call to arms and a brutal statement that the band’s music and message is every bit as relevant today as when it was formed thirty years ago”

Extreme Noise Terror Track Listing:
1. Punk Rock Patrol
2. Dogma, Intolerance, Control
3. No One Is Innocent
4. I Like Coca (Outo “I Like Cola”)
5. Think Outside The Box
6. Chained & Crazed
7. An Endless Cycle Of Misery
8. Sheep In Wolf’s Clothing
9. Cash And Trash
10. Cruel And Unusual Punishment
11. Last Fix Of Fame
12. Cage Paralysis
13. Only In It For The Music Pt. 27 (Black Putrefaction)

Formed in Ipswich, England in 1985, EXTREME NOISE TERROR is widely considered one of the earliest and most influential European grindcore bands, and particularly the forefathers of the crust punk, grind subgenre. The original idea was to set out to be the fastest hardcore punk band ever, consisting of dual vocalists Dean Jones and Phil Vane, guitarist Pete Hurley, bassist Jerry Clay and drummer Pig Killer, Vane and Hurley had previously played with Discharge-influenced acts Freestate and Victims Of War, whilst Jones and Pigkiller had been in Raw Noise. Aside from Discharge, the band cite Anti Cimex, Rattus and Kuro, as early influences. The band signed to Manic Ears after a solitary gig supporting fellow Brit punks Chaos UK, releasing a split LP with the band in 1986 entitled Radioactive Earslaughter. Although there were musical similarities between the two bands, EXTREME NOISE TERROR were already beginning to twist hardcore into what would later become known as “grindcore.”

In 1987, EXTREME NOISE TERROR came to the attention of John Peel. After seeing them live at the Caribbean Centre in Ipswich, Peel offered them their first (of four) Peel Sessions for BBC Radio 1. A second Peel Session was recorded the following May. During this period, the drum stool was filled by former Napalm Death drummer Mick Harris, although he left soon afterward and was replaced by Tony “Stick” Dickens of crust band Doom. The band’s debut, A Holocaust In Your Head, was later voted number three in Terrorizer’s essential European grindcore albums, who described it as, “marrying a thick crustpunk crunch and vitriolic lyrical assault with the newborn, clattering fury of grindcore…” The band undertook a headlining tour of both Europe and Japan in support of the album. Upon their return, EXTREME NOISE TERROR recorded a third Peel Session, which was released along with their first as a full-length LP by Strange Fruit. Sophomore full-length, Phonophobia, through Vinyl Japan soon followed.

EXTREME NOISE TERROR continued to tour throughout 1993 and 1994, signed to Earache Records and recorded Retro-bution, essentially a compilation of re-recorded material due to the band’s dissatisfaction with their earlier recordings. Shortly after, Phil Vane left to join Napalm Death, while Napalm Death frontman Mark “Barney” Greenway agreed to join EXTREME NOISE TERROR during the recording of their next album, Damage 381. The album, whose title comes from the BPM recorded on the title track, saw EXTREME NOISE TERROR moving further into grind metal territory, reincorporating some of the blast beats and screamed vocals that had been missing from their previous two releases. The album also benefited from a production from noted metal producer Colin Richardson. At the same time Napalm Death asked Greenway to return, which he agreed to do, leaving EXTREME NOISE TERROR once again lacking a second vocalist. Vane subsequently returned to the band in 1997.

In 2001, the band signed to Candlelight and released their fourth full-length album, Being And Nothing. They also played a fourth session for BBC Radio 1 that February and continued to tour Europe, including a slot on the main stage at Wacken Open Air in 2003.

By 2005 Ollie Jones of Desecration joined the band on guitar followed by bassist Andi Morris a short while later. Subsequent to the release of two split releases – one with Driller Killer, the other with Trap Them – the band unveiled Law Of Retaliation in 2009 which Terrorizer dubbed, “a rabid, intense and gleeful return to explosive, hyper-speed hardcore punk insanity.”

On February 17th, 2011, Phil Vane passed away in his sleep due to a cerebrovascular accident at the age of 43. The band struggled to come to terms with his death but continued playing live shows across Europe and Asia and in 2014 former Gorerotted and The Rotted vocalist Ben McCrow, joined Dean in the traditional EXTREME NOISE TERROR two-vocal assault.

Thirty years after their initial formation, the band shows no sign of mellowing or slowing things down. Hardcore punk, crust or grind? This is EXTREME NOISE TERROR.