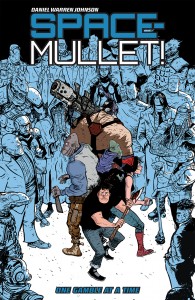 The perfect mix of drama, action, comedy, and heart, Space-Mullet! showcases Johnson’s style, which will appeal to fans of Japanese manga, European comics, and American comics alike.
Ex–Space Marine Jonah and his copilot Alphius rove the galaxy, just trying to get by. Drawn into one crazy adventure after another, they forge a crew of misfits into a family that must face the darkest parts of the universe together. Space-Mullet! is a richly detailed, accessible sci-fi world with heartfelt characters and an unforgettable story.

Space-Mullet!: One Gamble at a Time is in stores March 16, 2016. Preorder your copy today at your local comic shop or through these fine retailers: Amazon, Barnes and Noble, IndieBound