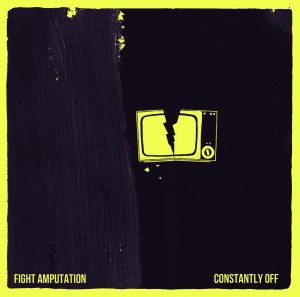 Constantly Off out now via Brutal Panda Records

Philadelphia, PA noise rock powerhouse FIGHT AMPUTATION (FIGHT AMP for short) have premiered their new music video for “Happy Joyful Life” via Noisey at THIS LOCATION. Compiled of strange found footage from creepy home movies and infomercials that have been left behind, the video provides a hearty fix of visual and aural stimulation for the ADD generation.

Constantly Off, FIGHT AMP‘s first new record in three years, was released this Summer via Brutal Panda Records. The album was recorded at Gradwell House Studios in Haddon Heights, NJ with engineer Steve Poponi (Ladder Devils, Fight Amp, Into It, Over It). Stream the entire new album HERE.

Additionally, the band recently released a new 7″ from the Constantly Off sessions via Reptilian Records, which can be streamed HERE.

FIGHT AMPUTATION will kick off a short run of West Coast dates with Kowloon Walled City this November, including an appearance at Day of the Shred Fest. A complete listing of dates is included below.

Stream all of FIGHT AMP’s releases via Bandcamp HERE.